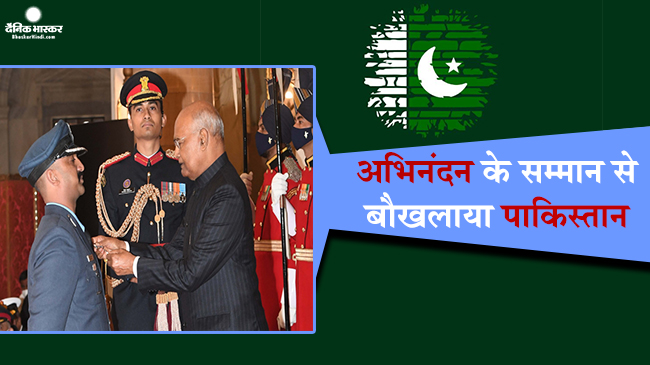 Digital Desk, New Delhi. As soon as India honored the hero of Balakot, Abhinandan Varthaman with the Vir Chakra, the neighboring country of Pakistan has been stunned. And in Anaf Shanaf, Pakistan is accusing India. Pakistan says that India gives respect to the person who did not even touch our MiG-21 by misrepresenting the facts.

Captain Abhinandan Varthaman was awarded the Vir Chakra by Indian President Ram Nath Kovind on Monday. Let us tell you that on 27 February 2019, Wing Commander Abhinandan shot down a Pakistani fighter aircraft F-16 in an air battle.

Earlier on Monday, Pakistan Peoples Party leader Sherry Rehman said that is this really happening? He is being given an award for drinking tea in the custody of Pakistan? A statement of the Ministry of External Affairs has been published in the Pakistani newspaper Dawn. The Pakistan Foreign Ministry has called the award of Abhinandan against the military code of conduct. Pakistan categorically rejects completely baseless Indian claims that a Pakistani F-16 aircraft was shot down by an Indian pilot, Abhinandan. Pakistan also accused India of living in an imaginary world.