Pandit families flee Kashmir for fear of being attacked by militants 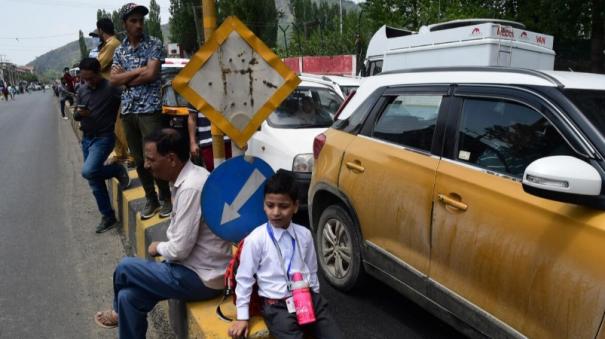 Srinagar: Terrorists target Pandit staff in Kashmir. The recent shooting death of a bank manager and a school teacher belonging to the Pandit community has created fear among Pandit families in Kashmir.

Thus the Pandit employees have demanded that they be allowed to work in the Hindu-majority area of ​​Jammu. But the government did not accept this request. The Kashmir Pandits Association (KPSS) has demanded that the Chief Justice of Jammu and Kashmir intervene in the matter and allow the Pandit families in fear to leave Kashmir.

In this situation, Pandit families living in Matan and Vesu in south Kashmir, Shakbora in Srinagar and Baramulla and Kupwara in north Kashmir were seen evacuating their homes and traveling in vehicles overnight.

Jammu is located at a distance of 290 km from Kashmir. About 80 per cent of the Pandit families living in Mattan in Kashmir’s Anantnag district have migrated to Jammu since January 1.

A Pandit employee said, “The state administration is making empty promises. We do not feel safe after the recent massacre. Of the 96 Pandit families who lived in Matton, only 12 families still exist. They will leave in the coming days. ”

Another Pandit, who is fighting in the Mattan area, said, “Massacres continue in Kashmir. The recent massacres have shattered our confidence. Until the situation in Kashmir improves, our demand is that Pandit staff be recruited outside Kashmir. It will not be safe for us to hire them in the district capitals. ”

A camp called Jagti was set up in Jammu for Kashmiri Pandit families in the 1990s. About 120 Pandit families came here yesterday from Baramulla and Kupwara districts of Kashmir.

In this context, in a letter to the Chief Justice of Jammu and Kashmir, Sanjay KD, Chairman of the Kashmir Pandit Sankarsh Samiti, said:

Every Pandit family living in Kashmir has been directly threatened by militants here. The Union Territory administration has failed to protect us. Kashmir Pandits and Hindus want to leave Kashmir.

This is an act against the right to life provided for under Article 21 of the Constitution of India. My request must be accepted as a welfare case. The Union Territory Government and the Central Government should be ordered to recruit minorities residing in Kashmir outside Kashmir. Thus he has said.