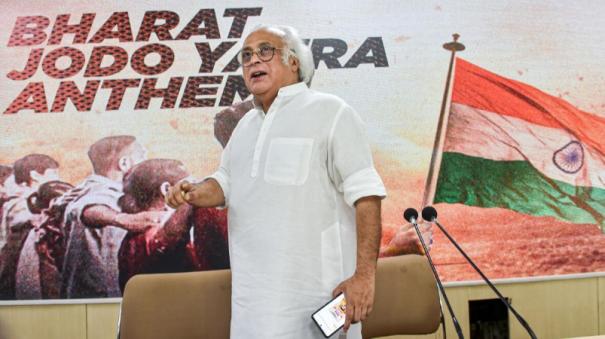 New Delhi: Any member can contest for the post of Congress President. The Congress party has said that it does not need the permission of the party leadership.

Rahul Gandhi resigned from the post of party president following the defeat of the Congress party in the 2019 Lok Sabha elections. Senior Congress leader Sonia Gandhi is leading the party as interim president.

Meanwhile, Congress General Secretary Jairam Ramesh said yesterday, “The entire party is involved in making Rahul Gandhi’s India Unity Mission a success. Any member can contest for the post of Congress president. Elections will be conducted in a democratic and transparent manner. No one’s permission is needed to run for the post of president, especially the party leadership,” he said.

Congress leaders of Maharashtra, Tamil Nadu, Bihar, Kashmir, Rajasthan, Chhattisgarh and Gujarat have passed resolutions demanding Rahul Gandhi as their president. But Rahul Gandhi is yet to clarify his decision.

Shashi Tharoor, who is on the list of disaffected Congress leaders known as the G23, has insisted on the need for structural change in the Congress party.

Yesterday Sasi Tharoor met Sonia Gandhi who returned to Delhi after a medical examination abroad. According to party sources, Sonia has said that she has no objection to Sasi Tharoor contesting for the post of president.

I will act neutrally

In this regard, Congress sources say, “Sonia Gandhi has expressed full satisfaction about the election of the Congress president. He has promised to remain neutral in the elections for the post of President. He believes that internal elections will strengthen the party.”