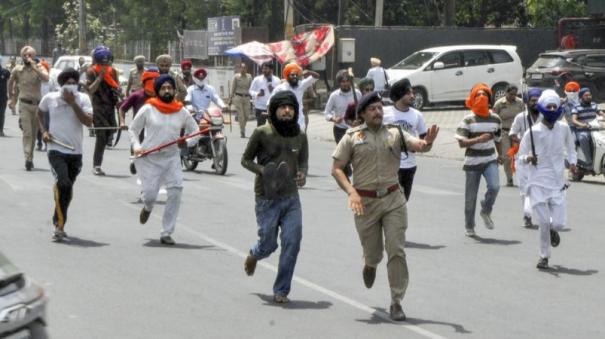 Patiala (Punjab): Held in Patiala A curfew has been imposed in the city till 7 am due to clashes between the two factions during the anti-Khalistan rally. Harish Singla has been arrested in connection with the clash.

Tensions were high in Patiala, Punjab, between two factions during an anti-Khalistan rally on Friday. The clash took place between two groups outside the Kali temple in Patiala town. The police fired into the sky to disperse the crowd. A curfew has been imposed in the city from 7pm on Friday to 6am on Saturday due to the clash.

Harish Sinha, the leader of a group that calls itself the Shiv Sena (Paul Thackeray), organized a march in Khalistan Murtabad. The march started from Arya Samaj Chowk. Shiv Sena volunteers marched to raise the Khalistan Murtabad slogan. As the procession approached the Kali temple, they were confronted by a group of Sikhs believed to be pro-Khalistan. Then there was a clash between the two groups. Members of both groups attacked each other by throwing swords and stones at each other. Thus there was tension. Harish Singla has been arrested in connection with the clash.

Commenting on the violence, Chief Minister Bhagwant Mann said, “The clash in Patiala is unfortunate. I have spoken to the police chief. Peace has returned to the area. We are closely monitoring the situation. We will not allow anyone in the state to create chaos. Peace and reconciliation in Punjab is very important.”

According to police sources, the Shiv Sena (Bal Thackeray) marched without the permission of the police.