“Peace be upon you.” This is how Saudi Crown Prince Askar saluted Turkey 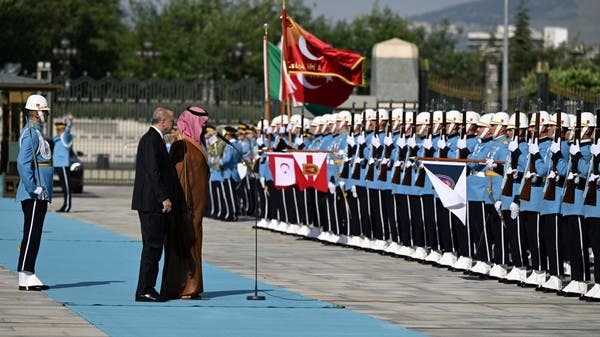 During the arrival of Saudi Crown Prince Mohammed bin Salman to the presidential complex in Ankara, and during the reception ceremony with Turkish President Recep Tayyip Erdogan, they proceeded on the blue carpet until they stood in front of the Turkish presidential guard to salute, and there the Saudi prince said, “Peace be upon you.”

It was not an ordinary situation, as the video in which the Crown Prince appeared sparked wide reactions on social media platforms, where presidents and leaders used to salute the Turkish Presidential Guard with the protocol phrase “Welcome Askar.”

The salute that the Saudi crown prince replaced, over 112 years old, started from the era of Ataturk when he said to the soldiers, “Welcome, Askar,” and the only response from them was “Thank you, sir,” until this phrase became a custom among the Turkish guards.

Saudi Crown Prince during his visit to Turkey (AFP)

The Saudi Crown Prince concluded his regional tour through his third stop in Turkey, where he held talks with the Turkish President at the Presidential Palace in the capital, Ankara, on political and economic files. The official visit also witnessed the signing of agreements in various fields.