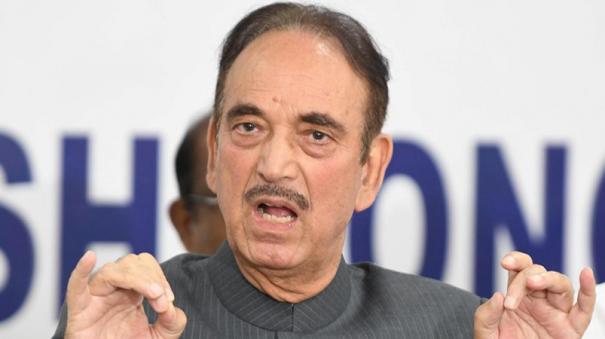 Jammu: Ghulam Nabi Azad, who resigned from the Congress party, announced the launch of his own party yesterday. He said that the people of Jammu and Kashmir will decide the name and flag for his party.

Regarding this, former Kashmir Minister G.M. Saruri said, “People are well aware that Ghulam Nabi Azad served as the Chief Minister of Kashmir from 2005 to 2008. People of Kashmir are eagerly waiting for him to become the next Chief Minister. “In the next assembly elections, the party led by Ghulam Nabi Azad will be the real party in Jammu and Kashmir politics,” he said.

I haven’t decided on a name for my party yet. The name and flag of the party will be decided by the people of Jammu and Kashmir. I will give the party an Indian name so that everyone can understand it. My party will focus on getting statehood back to Kashmir, land ownership and employment for the people of the state.

The Congress Party computer was not created by Twitter. Created in the blood of volunteers. That party is now ruined. The deliberative system in the party was destroyed by Rahul Gandhi. This is what he said.