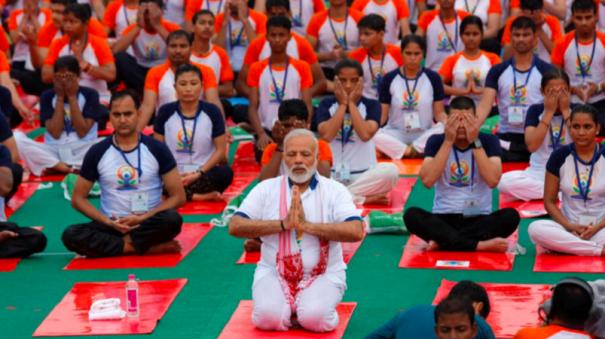 New Delhi: Prime Minister Narendra Modi has said that it is very important for people to practice yoga today as diseases and lifestyle related health risks are on the rise.

‘Yoga for Humanity’ will be the theme of the 8th International Yoga Day to be celebrated this year, Prime Minister Modi said at the ‘Voice of the Mind’ event. Accordingly, this year special events have been organized for the disabled, transgender, women and children with a focus on humanity.

In a message on Twitter on the eve of International Yoga Day, Prime Minister Narendra Modi said, “Yoga practice has become very important as the health risks of illness and lifestyle are increasing among the people, especially the youth. That is why people should practice yoga for good health and well-being, ”he said.

Prime Minister Modi also shared a video of his thoughts on yoga and various asanas on Twitter. As the 75th Independence Day of Independence is being celebrated this year, 75 Union Ministers are participating in yoga programs at 75 historic and cultural centers across the country.

‘Yoga for Humanity’ will be the theme of the 8th International Yoga Day to be celebrated this year.