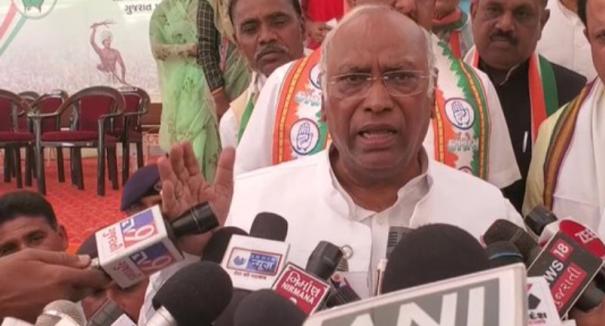 Philoda: Congress president Mallikarjuna Kharge has expressed confidence that the Congress party will form the government by getting a majority in the Gujarat assembly elections.

Prime Minister Narendra Modi is going to campaign in Banaskantha district today. In view of this, he had darshan of Sami today (Dec 2) at Okanath temple in the district.

In this case, Congress leader Mallikarjuna Kharge campaigned in Biloda, Gujarat today. Speaking then, he alleged that unemployment in the country has increased to an unprecedented level during the Narendra Modi-led regime. He criticized the BJP for not fulfilling its promises regarding employment, but asked the BJP whether it would blame the Congress for this too.

Mallikarjuna Kharge pointed out that crude oil prices have come down drastically in the international market. He said that when the Congress was in power, on May 16, 2014, the price of a barrel of crude oil was 107.09 dollars and now it has decreased to 87.55 dollars. But on May 16, 2014, a liter of petrol in Delhi cost Rs. 71.51 and one liter of diesel Rs. 57.28, Mallikarjuna Kharge said that now one liter of petrol is Rs.96.72 and one liter of diesel is Rs. He mentioned that it is also 89.62. He alleged that although the price of crude oil has fallen to the lowest level in the last 10 months, the price of petrol and diesel is still high in the market.

President’s speech was like an election campaign: Shashi Tharoor reviews

Magaly on the alleged divorce from Christian Domínguez: “The only one who believes him is Pamela Franco”

Ronaldo sells his private plane .. He used to rent it at one hour for this amount! (photo)