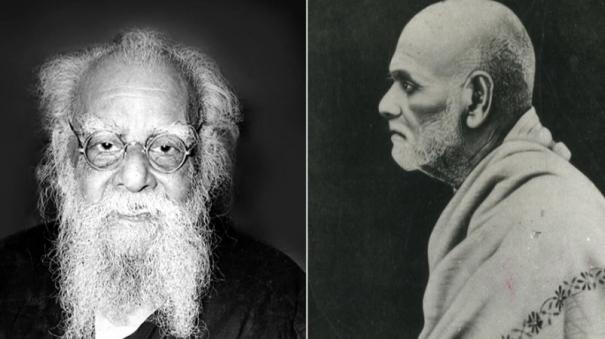 Bangalore: Controversy has erupted over the exclusion of sections on Periyar and Narayana Guru from the 10th standard social studies textbook in Karnataka.

Protests and debates are raging in Karnataka over the inclusion of RSS leader Keshav Baliram Hegde’s speech in a Class X language textbook. By the time this controversy is resolved, information about Periyar and Narayana Guru has been deleted in a new 10th standard social science textbook.

The PDF of the new social science textbook has been published on the website of the State Textbook Institute. Part 5 features a lesson entitled Social and Religious Reform Movements.

Father Periyar, who went to Kasi, a monk, transformed himself into an atheist by the events that befell him in Kasi. Initially involved in Gandhian policies, he joined the Congress Party in 1919. Father Periyar left the party in 1925 after the Congress party refused to accept the demand for reservation in public service and education. The Dravidians are known to have lived uprightly with equality and rationality.

Sri Narayana Guru is hailed as the father of the renaissance of Kerala and is known as the best educator. He left home at the age of 23 and came to Tamil Nadu and became a monk. He specializes in the Vedas, Upanishads, Puranas, Survival Mantras, Buddhist and Jain traditions, the Triune Vedantas, and Indian and foreign philosophies. The Sree Narayana Dharma Board of Trustees was formed as a result of his reform policies. Mahatma Gandhi hailed him as ‘Avatara Purushar’. Bharathiar praised his social reform policies and Sanskrit works.

The removal of lessons about these two, who had played a significant role in social reform, has sparked protests in Karnataka.