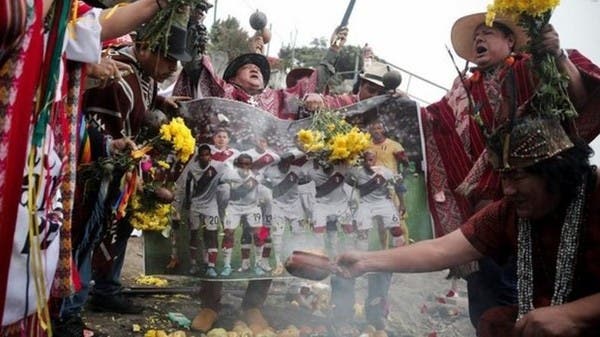 Thirteen charlatans from the country of Peru decided to support their team in the qualifying play-off for the 2022 World Cup by holding spiritual rituals to ensure that the team reached the world championship.

The South American team will face its Asian counterpart on Monday in Doha, with the winner qualifying for the World Cup and accompanying the fourth group teams, which includes France, Denmark and Tunisia.

Shamanism, which is a religious belief, has historically been associated with indigenous societies and is a belief that communication with the other world helps heal the sick, communicate with spirits, and accompany the spirits of the dead.

The charlatans sought their ways to ensure that their team qualified against Australia, as one of them brought a picture of the Australian players and stabbed it with swords, so that one of the “shamans” would blow into a traditional instrument called “Potuto or Caracola”.

Walter Alarcón, one of the charlatans who attended the event, said: We had a Peruvian victory celebration and summoned all the shamans on a national level, there are 13 shamans because the meeting is on June 13th and we’ve seen our World Cup in advance.

Alarcon added: Peru will celebrate in Qatar by qualifying for the World Cup because we saw the crowd celebrate after we ate ayahuasca herbs.

Ayahuasca is a hallucinogenic plant that has been used by shamans and spiritual healers in the Amazon region of South America for centuries for medicinal and spiritual purposes.