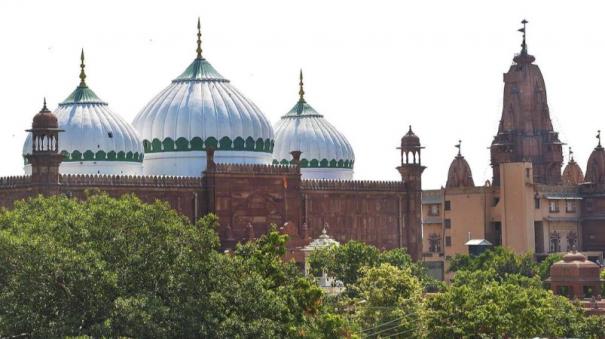 New Delhi: Like the Gyanwapi Mosque in Varanasi, a petition has been filed in the court seeking a field inspection at the Shai Itka Mosque in Mathura. This is considered to be a problem for the Uttar Pradesh mosques built by the Mughals.

The Gyanwapi Mosque is located in Varanasi, UP, next to the Kasiviswanathar Temple. Built by the Mughal Emperor Aurangzeb, the mosque is said to have been built by Aurangzeb after demolishing the nearby Viswanathar Temple. The case has been pending in the Varanasi High Court for several years. Meanwhile, a case was filed in August 2021 for the daily visit of Goddess Singarak Gauri of the temple. The idol of Goddess Gauri is located on the outer wall of the mosque inside the temple. Thus, the civil court in Varanasi, which is hearing the case, had ordered a search of the mosque with photo and video recordings and a report.

In this case, a case similar to that of Gyanwapi has been filed in Shai Itka, near Krishna’s birthplace in Mathura. The Krishna temple here is said to have been demolished by the Mughal emperor Aurangzeb and the Ithaca mosque built. Cases against it have been filed in the courts of Mathura in recent years and are pending. In this context, senior advocate Mahendra Pratap Singh, who shot one of the mothers, has filed a fresh petition. In this, he filed a case in the civil court of Mathura yesterday seeking excavation inside the Shai Itka mosque.

In his petition, advocate Mahendra Pratap Singh stated, ‘The Shai Eid Mosque was built by demolishing the Tagore Kesavdev Temple in Krishna Janmabhoomi. The 13.37 acres of land of the mosque near the present temple is to be handed over to the Hindus.

Archaeological excavations should be carried out inside the mosque for historical and archaeological evidence. The court should get the report and conduct an inquiry. ‘ Has mentioned.

The problem of a similar Mughal-era mosque in UP first arose in Ayodhya. It has been reported that the Mughal emperor Babur demolished the ancient temple here, which is considered to be the birthplace of Ram, and built a mosque. The final verdict in the nearly 70-year-old case was handed down by the Supreme Court in November 2019.

The ruling on behalf of the Hindus allowed the construction of a Ram temple there and gave the mosque another location. Following this the problem of Mughal mosques in Varanasi and later in Mathura intensified. The new petition related to the Mathura Mosque is expected to come up for hearing on July 1.