Pictures .. Tombs reveal the story of a 4,500-year-old road network in Saudi Arabia 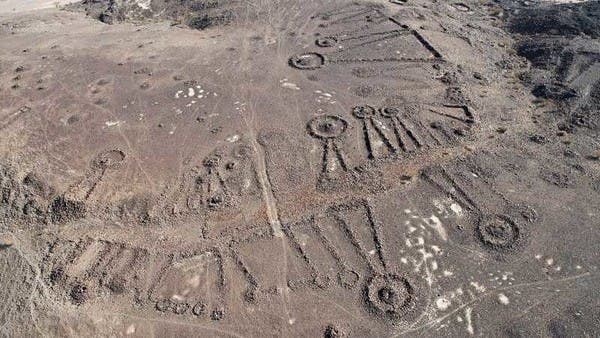 The plan launched by the Royal Commission for Al-Ula Governorate, which was titled “A Journey Through Time”, achieved amazing success, after the discoveries carried out by the Commission reached amazing facts that tell the story of the inhabitants who lived in the northwest of the ancient Arabian Peninsula, and who were building “funeral corridors.” Long, which are main paths surrounded by thousands of funerary monuments that linked the oases and pastures, these paths reflected many facts about the high degree of social and economic interdependence among the inhabitants of the region, in the third millennium BC, and this discovery came in partnership between the authority and the University of Western Australia.

These discoveries came after a work team at the University of Western Australia submitted part of a broader effort of 13 specialized teams, whose members participated from around the world and are working in the Archeology and Conservation Project in cooperation with Saudi experts in Al-Ula and the Khyber Governorate, and it will extend for 15 years, and aims to develop Al-Ula and parts of the country. of Khyber as a leading global destination for cultural and natural heritage.

The effects of cemeteries in AlUla

In its latest research, headed by Dr. Matthew Dalton as Principal Investigator, the University of Western Australia team used satellite image analysis, aerial photography, ground surveys and excavations to identify and analyze funeral corridors across an area of ​​at least 160,000 square kilometers in the northwest of the Arabian Peninsula. The team recorded more than 17,800 stone burials in the shape of a necklace within their primary study areas in the governorates of Al-Ula and Khaybar, where about 11,000 of them form part of the funerary corridors.

Whether in the basalt plains or mountain passes, the densest assemblages of funeral facilities in these paths were concentrated near permanent water sources, and the direction of the paths indicates that many of them were relied upon to move between the main oases, including Khaybar, Al-Ula and Tayma, while the paths fade away. other across the landscape surrounding the oases; This indicates that they were used to transport herds of domestic animals to nearby pastures during periods of rain. Funerary corridors linked many inhabited oases.

Some of the discoveries in Al-Ula

The importance of archeology

Dr Hugh Thomas, Project Director, said: “The research conducted by the University of Western Australia team, and our fellow researchers from the Royal Commission in AlUla and Khyber, shows how important the archeology of this region is to advancing our understanding of how its inhabitants lived in the Neolithic and Bronze Age periods. throughout the Middle East, and our findings show that these facilities linked many inhabited oases located within a vast area, and that the funerary corridors were established about 4,500 years ago, and these corridors are concentrated in particular around Khaybar, and constitute one of the most important funerary landscapes with Visual density compared to peers around the world.

The Kingdom is the home of advanced sciences

Amr Al-Madani, CEO of the Royal Commission for Al-Ula Governorate, emphasized: “The more we know about the ancient inhabitants of northwestern Arabia, the more inspired we are in our mission to reveal the way they were thinking, they lived in harmony with nature, honored their ancestors and interacted with the world.” The broadest, and the work carried out by our archaeological teams in 2021 reflects the Kingdom’s leadership as a home for advanced science, and of course we look forward to the joining of more research teams in the current year 2022.

The life of the ancient inhabitants of the Arabian Peninsula

While Dr. Rebecca Foot, Director of Archaeological Research and Cultural Heritage at the authority, said, “The projects that were launched in Al-Ula and Khyber more than three years ago, and include field surveys carried out by specialized teams such as the University of Western Australia, have begun publishing their results. It is remarkable that We see what her data analyzes reflect on many aspects of life in the Neolithic to Bronze Age period in northwestern Arabia, and this article is just the beginning of a lot of research that will enrich our knowledge of the history extending from prehistoric times to the modern era, which of course will have an impact important for the region in general.

Regarding the next steps, Jose Ignacio Gallego Revilla, Executive Director of the Department of Archeology, Heritage Research and Conservation at the authority, said, “We are waiting for more in 2022 and the coming years, when we will reveal the depth and richness of the heritage in the region, which for decades has been shrouded in mystery, to achieve our goals in The scientific strategy at the Kingdoms Institute.