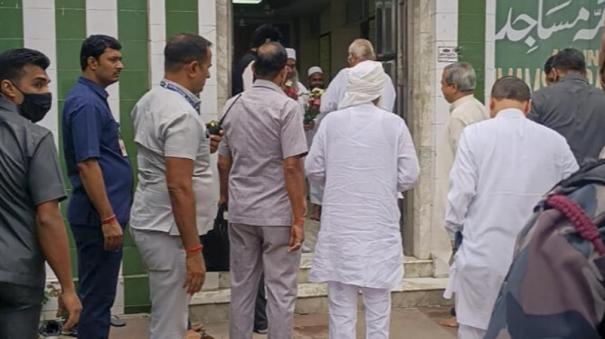 Delhi: Amid unrest in the Muslim community in India over the discovery of a Shiva lingam in Varanasi’s Gnanawabi Masjid complex, Nubur Sharma’s comments on Prophet Muhammad and the hijab controversy in Karnataka, RSS chief Mohan Bhagwat met Imam Omar Ahmed Ilyasi, president of the All India Imams Organization, at a mosque in Delhi. A few weeks ago, Mohan Bhagwat had said, “Don’t go looking for a Shivalinga in every mosque.” The meeting held as a follow-up to this is an important event.

Speaking about the meeting later, Umar Ahmed Ilyasi said, “It is a great pleasure that RSS Chief Mohan Bhagwat accepted our invitation and visited the office of the All India Imam Organization. He is the father of our country. As per my request, he visited the Tajveedul Quran Madrasah. He interacted with the students studying there. . Then Mohan Bhagwat said that our genes are the same and the method of worshiping God is different.”

The background to the meeting?

“You should visit a madrasa. There is a lot of talk about madrasas these days. See for yourself and you will like it,” an RSS functionary told an English media outlet that the meeting was planned almost a year in advance after Imam Ilyasi’s invitation. Also, this meeting is not related to the current political situation in the country, the RSS said.

Mohan Bhagwat, speaking to the children studying in the madrasa at the meeting, highlighted the love for the country and the importance of human life. Questioning why children are not taught the Bhagavad Gita, the Hindu scripture, just as the Koran is taught in madrasas, he said, “From the Himalayas to Kumari, India is one. The paths of everyone in it must be respected. Every life must be protected.”

He further said to the madrasa administrators, “Muslim children studying in madrasas are facing many problems. Because they don’t know Hindi, they can’t fill the form at the airport, railway station etc. Modern knowledge should be taught in madrasas. Issues of non-consensus should be discussed. We all want to live together again and again.” It is emphasized,” said Bhagwat.