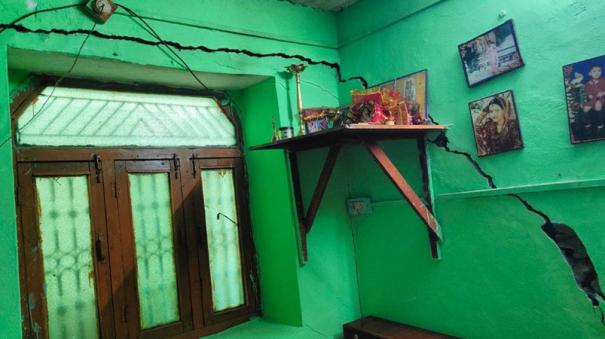 The town of Joshimath is situated at the foothills of the Himalayas in Samoli District, Uttarakhand. This town is the gateway to Badrinath temple.

On December 24, the public gathered and staged a huge protest to draw the government’s attention to the issue of Joshimath city.

Vishnugat hydroelectric power station project and Sar Dham highway work has been stopped due to day by day cracks in the main road and buildings. Uttarakhand Chief Minister Pushkar Singh Thami visited Joshimath yesterday. He directed the officials to take the public to safe places.

More than 200 families have been accommodated in relief camps set up in hostels, hotels, schools and colleges. It has been announced that a monthly assistance of Rs.4,000 will be given to a family on behalf of the State Government.

In this context, Prime Minister Modi held a telephone consultation with Chief Minister Pushkar Singh Thami on the issue of Joshimath city yesterday.

Meanwhile, a high-level consultation meeting was held yesterday on behalf of the Prime Minister’s Office regarding Joshimath city. Cabinet Secretary, National Disaster Response Force officials, senior officials of Uttarakhand, Joshimath District Collector and many others participated in the video meeting chaired by P.K. Mishra, Principal Secretary to the Prime Minister.

Petition to the Supreme Court

Swami Avimukteswaranand Saraswati has filed a Public Interest Litigation in the Supreme Court on behalf of the Joshi Mutt in Joshimath Nagar.

“The current problem in Joshimath should be declared as a national calamity. There is no need for development projects that destroy the environment and human life. The petition demanded that government schemes should be stopped immediately.