PM Modi is in a hurry for the cabinet reshuffle, this will give an idea 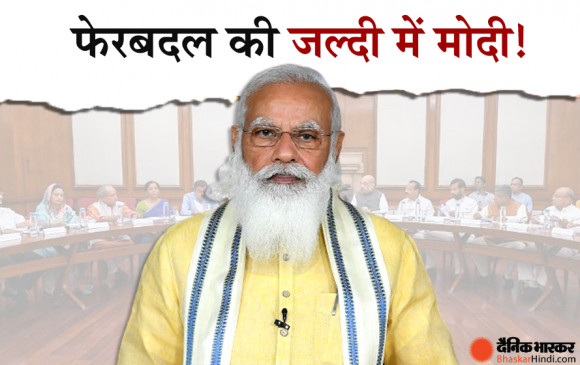 New Delhi, June 15 (IANS). There is no official statement on the Union Cabinet expansion or reshuffle at the Centre, but speculations are rife in this regard, as Prime Minister Narendra Modi has made two separate appointments of top party officials and ministers in a span of four days. Have had two consecutive meetings with the groups.

Some in the Bharatiya Janata Party (BJP), requesting anonymity, noted that the PM’s meetings with his cabinet colleagues are nothing more than routine affairs. According to him, these meetings were conducted only to know what is going on in his ministries and what is the future development plan amid the COVID-19 crisis.

A source said that the Prime Minister is believed to have taken stock of the work done by the government in the last two years and discussed several other issues.

Both the brainstorming sessions – one on Friday last week and the other on Monday – were held at the prime minister’s 7, Lok Kalyan Marg residence.

Sources said that both the talks of the cabinet ministers with the prime minister lasted for about five hours.

Defense Minister Rajnath Singh and Road Transport Minister Nitin Gadkari, BJP President J. P. Nadda and general secretary in-charge of the saffron party B. L. Santosh met Modi in the latest session to seek suggestions on necessary reforms in the functioning of the government and how to achieve synergy between the government and the organisation.

Union ministers Sadananda Gowda, V.K. Singh and V. Muraleedharan were among other leaders who reportedly participated in the deliberations.

The party, however, has maintained that such meetings are a regular affair and are now attracting so much attention only because physical meetings are being held after a long gap.

In fact, due to the outbreak of the Kovid epidemic, the meetings were being held virtual i.e. online for a long time.

On the other hand, political observers and party insiders believe that this could be an exercise before a possible cabinet expansion and reshuffle, but no official statement has come out in this regard so far.