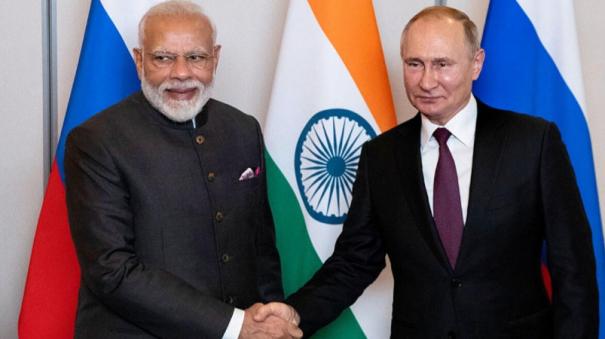 The two leaders also discussed the shortage of food grains, fertilizers and fuel at the international level.

Due to this war, the US and European countries have imposed severe economic sanctions against Russia. India has been neutral in this issue since the beginning. “Russia and Ukraine must reach an amicable settlement through peace talks. The central government has been insisting that the war should end immediately.

In this regard, Prime Minister Narendra Modi has held reconciliation talks with the presidents of Russia and Ukraine several times over the phone. In addition, the central government safely rescued around 20,000 Indians stranded in Ukraine when the war broke out.

As the war continues, Prime Minister Narendra Modi spoke to Russian President Vladimir Putin over the phone yesterday. At that time, Prime Minister Modi insisted on ending the war in Ukraine through inter-governmental talks. The two leaders also discussed the shortage of food grains, fertilizers and fuel at the international level.

Russian President Putin visited India in December last year. At that time, Putin and Modi held talks on exports and imports related to food grains, fertilizers and medicines. The two leaders discussed the implementation of the decisions reached.

The Russian Presidential Palace said in a statement yesterday:

Russia will continue to provide energy, fertilizers and food grains to India. Certain countries have imposed economic sanctions on Russia. Those countries will soon realize their mistake. Due to the embargo on Russia, the prices of fuel, food grains and fertilizers have gone up in the international market.

Russia did not go to war on Ukraine. Only the country’s military bases are being destroyed due to security threats. President Vladimir Putin informed Indian Prime Minister Narendra Modi in this regard. It says so.

Indonesian President Joko Widodo also spoke to Russian President Vladimir Putin on the phone yesterday. In a statement released by the Russian Presidency, ‘We will continue to provide fertilizers including nitrogen, phosphate and potash to Russia’s friendly countries including Indonesia. We will distribute fuel and food grains without any hindrance.