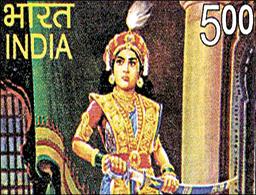 18th century Veeramangai Rani Velu Nachiyar from Sivagangai Principality of Tamil Nadu. Velu Nachiyar, the only daughter of Sethupathi Raja, also knew martial arts and horsemanship. He also learned many languages ​​like French and Urdu. In the Battle of Kalayar Kovil, her husband Muthu Vaduganath Devar was killed by a British force led by the son of the Nawab of Arcot. After that, Velu Nachiyar, who lived in Dindigul for 8 years, recovered his empire in 1780 with the support of Gopal Nayakar, who ruled there, and Hyder Ali, Sultan of Mysore.

Rani Velu Nachiyar earned the title of Vira Mangai after defeating the British and the Nawab of Arcot in battle. The central government also issued a commemorative postage stamp in 2008 to honor his bravery.

Yesterday, the Prime Minister paid tribute to Rani Velu Nachiyar on her birthday. In a message in Tamil on Twitter, he said:

“I pay homage to Veera Mangai Rani Velu Nachiyar on her birthday. He stood up and fought for justice for his people. He actively opposed colonialism and worked for social good. His bravery will be an inspiration to the generations to come,” said the Prime Minister.