SportsPochettino: We have big names..but we don't have a team
Sports

Pochettino: We have big names..but we don’t have a team 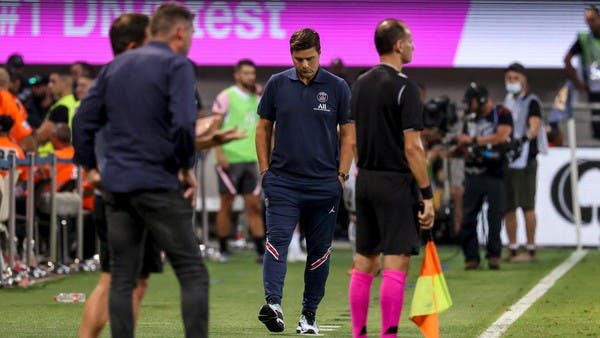 Paris St Germain has become an extraordinary candidate for the Champions League title since the signing of Lionel Messi this season, but coach Mauricio Pochettino said he has not yet transformed his group of brilliant players into a cohesive team.

Saint-Germain signed Messi on a free transfer from Barcelona to form a strong attacking line with the presence of Frenchman Kylian Mbappe and Brazilian Neymar, but the trio did not show their best so far.

“We are not a team yet,” Pochettino told a news conference on Tuesday before facing Club Brugge in the opening rounds of Group A. The club brought in a lot of players this summer and there are some big names but we haven’t turned into a team.

We are a group of players who need to achieve good results. There is a feeling that Saint-Germain and Chelsea are the strongest, but Chelsea, the defending champion, will be the team to beat, especially after strengthening its squad.

Captain Marquinhos said there was no additional pressure to win the Champions League after Messi joined for two years alongside former Real Madrid captain Sergio Ramos and midfielder Jorginho Wijnaldum from Liverpool.

“We deal with pressure every season, especially when playing for PSG, and this is part of the game,” the Brazilian defender continued. Because of the squad we have, there will be more talk and we are happy to have this group of players, but no extra pressure, only positive things.

Saint-Germain qualified for the semi-finals last season and was runner-up in 2020, but he has never won the title.

Pochettino said that he had not yet decided the fate of the participation of Mbappe, Neymar and Messi, who played only half an hour with his new team, in Bruges, indicating that he would make the decision after training on Tuesday.

In the case of the participation of the trio together, Marquinhos confirmed that there are no concerns about how to defend.

He explained: “If the three play up front, they have experience and know that we need to defend collectively and the defense must press from the top to make them in the best conditions to attack.”

The Argentine coach has many options in attack, but perhaps the most important thing is to choose between Keylor Navas and Gianluigi Donnarumma in goalkeeping, after the arrival of the Italian goalkeeper, who led his country to the European Championship.

He continued: “We will make decisions game by game and I think this is more fair and we are happy to have the two goalkeepers in our squad.” The season is long and the club will benefit from both of them, and every player knows this when signing for Saint-Germain.

Previous articlePatricio Parodi clarifies his relationship with Luciana Fuster: “I’m single, I can do whatever I want”
Next articleKiev refuses joint inspection of DPR facilities damaged by shelling