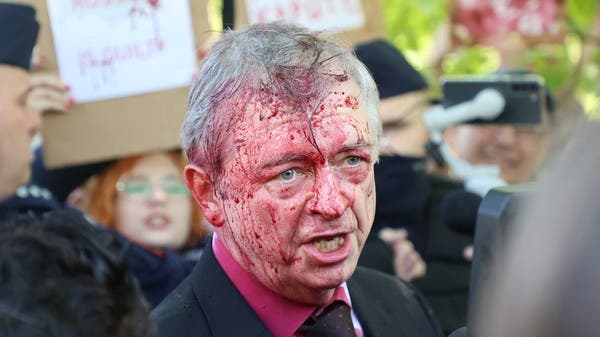 In response to Russia’s ambassador in Warsaw being sprayed with a red substance on Monday by pro-Ukrainian activists when he tried to lay a wreath to mark Victory Day on May 9 to commemorate the defeat of Nazi Germany in World War II, Poland described what happened as “unfortunate”.

The Polish Ministry of Interior also revealed that it had asked the Russian ambassador not to participate in the victory celebrations in Warsaw.

Unidentified persons attacked the Russian ambassador to Poland, earlier today, and a video clip spread on social media showed the moment of the attack while the ambassador laid flowers at the tomb of Soviet soldiers in the capital, Warsaw.

The clip showed the Russian ambassador, Sergey Andreev, standing next to the tomb of the soldiers, as unidentified people threw red paint at it, according to what was reported by the Russian “Sputnik” agency.

Russia’s ambassador to Poland got a facefull of red paint today when trying to lay flowers at the graves of Soviet WWII soldiers in Warsaw. The crowd is chanting “fascists!” pic.twitter.com/hWHGPFnI7M

Despite the attack, the Russian ambassador continued to stand in front of the shrine, as the Polish police did not provide the necessary protection for the Russian diplomatic delegation in the region, according to Moscow.

In addition, following the attack, the Polish police opened a safe corridor for him to get out of the area.

In turn, Russia accused the Polish authorities of complicity with the protesters in the attack on its ambassador.

“The attack on the Russian ambassador in Warsaw once again reveals the bloody face of the neo-Nazis,” said Russian Foreign Ministry spokeswoman Maria Zakharova.

Poland has taken in hundreds of thousands of refugees from neighboring Ukraine since Moscow sent troops into the country on February 24.