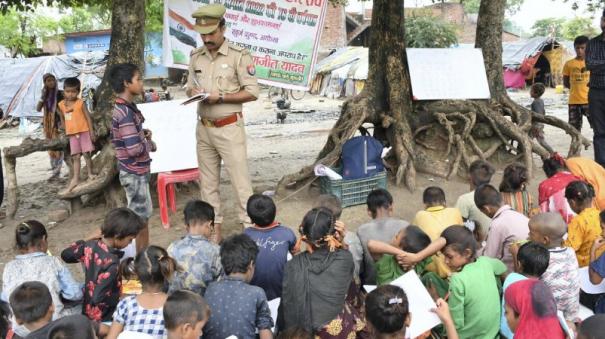 UP Ranjeet Yadav joined the police department as Assistant Inspector in 2015. While working at Ayodhya’s Nayagad police station while patrolling, the scene he met has taken a new turn. At that time, many of the beggars in temples and monasteries were children. Ranjith has seen them begging with their families and alone.

He wants to give them basic education and enroll them in schools. When he tried to reveal this to them, many ran and hid because he was a policeman. However, he approached them without letting go, gradually got used to them and changed their minds. They wanted to change their life and started observing the classes started by Ranjith under the tree on the banks of Sarayu river. Ranjeeth conducted the classes from 7.00 am to 9.00 am before his daily police work.

He has taught Hindi, Mathematics and English subjects in these classes which started from September last year. As a result many boys and girls learned to read and write Hindi and English to some extent.

And some even learned basic mathematics. As a result, some of them have got the opportunity to study directly in government schools of Ayodhya from classes 3 to 5. They have started calling Ranjith ‘Vardike Guruji’ because he is sitting in uniform and teaching.

Ranjit Yadav, who is currently working in the DIG office of Ayodhya, says, ‘I have 60 boys and girls taking lessons. Those who sat in these classes as a sport also started showing interest in it. I do this the rest of the time without interrupting my work. Through this, a special value is created for the police department’ he said.

Ranjith holds his Master’s degree from the prestigious Banaras Hindu University of UP. People of the area are attracted by his social work and help in various ways. Some buy textbooks and notes for the children. Still others enjoy giving breakfast to the children every day.

Thus, in the class of Ranjith, who is also known as an academic saint, children study without religious differences, whether Hindu or Muslim. Those who earn a living by performing yasakam in the monasteries and temples of Ayodhya have also started sending their children to this class.