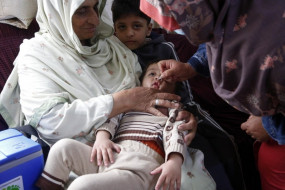 Digital Desk, Islamabad). Pakistan’s polio eradication campaign remains in tatters despite an alarming jump in cases last week. The Guardian reported that eight cases of polio in children have been reported in the last one month in the North Waziristan district bordering Afghanistan. Officials believe the new outbreak is due to parents falsely marking themselves and their children as vaccinated, and the government has launched an investigation into the outbreak. North Waziristan is a former Taliban stronghold in northwest Pakistan, where the high vaccine rejection rate is believed to be behind the new cases.

Fake markings and denial are two of the major reasons in the recent outbreak, said an official with Pakistan’s polio eradication programme, with polio workers conspiring with parents to miss vaccinations. National Program Coordinator Shahzad Baig said, “The cases are shining a light on exactly where the challenges lie and we are doing our best to ensure that the virus remains contained and we keep fighting it till the end.” The Guardian reported that before this surge, the last case of child paralysis as a result of polio was reported in January last year.

Federal Health Minister, Abdul Qadir Patel, said after the first two cases in April, the polio program took immediate steps to prevent further spread of the virus in the region, especially in historic reservoirs (of infection) in Karachi, Peshawar and Quetta. . Terrorist groups in Pakistan have killed more than 100 health workers and their security guards since 2012. According to the World Health Organization, Pakistan is one of only two countries, along with Afghanistan, where the wild polio virus is still endemic.