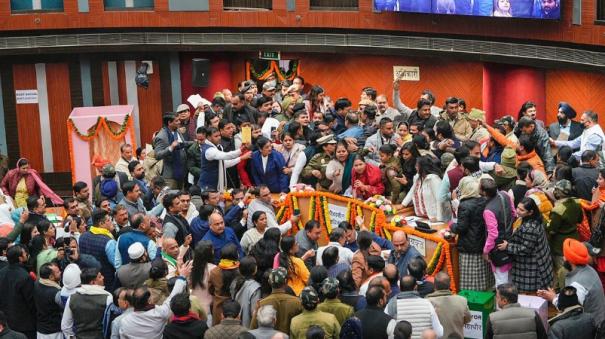 New Delhi: During the election of the Mayor of Delhi Corporation, there was chaos when the Aam Aadmi Party and BJP members came to the middle of the House raising slogans and clashed. As a result, voting was suspended and Parliament adjourned.

A month after the local body elections in Delhi, the election for the new mayor was to be held today (Friday). The Aam Aadmi Party had won more seats in the local body elections, leaving the BJP in power for 15 years behind. In this situation, the Aam Aadmi Party had fielded Shelley Oberoi for the post of Mayor of the Corporation. Rekha Gupta has been suspended from BJP. The Congress Party had announced that it will not participate in this mayoral election.

As the election to elect a new mayor was scheduled to take place on Friday, Satya Sharma, who was appointed as the interim chairman of the Municipal Corporation by Delhi Lt Governor VK Saxena, invited the nominated members of the aldermen to take oath before the mayoral election. Protesting against this, the Aam Aadmi Party councilors came in front of the Parliament and raised slogans and protested.

The Aam Aadmi Party had alleged that the Governor had arbitrarily appointed 10 nominees without consulting the Delhi government. Before the nominated members today, they argued that the elected members should be invited to take oath. They continued to come in front of the House and protest. Following this, BJP members also raised slogans. This led to conflict between the two party members. Marshals had to be called in to deal with the situation.

The Aam Aadmi Party alleged that if the BJP lost in the Delhi local body elections held last December, the Lt. Governor was acting as a major factor in the party’s victory in the mayoral elections.

AAP MLA Saurabh Bhardwaj said on Twitter, “It is a tradition to appoint a senior member as pro-tem Speaker and presiding officer, but BJP is destroying all the democratic dignity of the House.”

After announcing the names of the nominated members, he appointed councilor Satya Sharma from BJP as the temporary speaker for today’s mayoral election. It nominated senior councilor Mukesh Goyal for this responsibility.

BJP alleges: BJP’s Manoj Tiwari had said on his Twitter page, “All the proceedings are taking place according to law. They are making excuses because they know they have lost morally.”

Meanwhile, the BJP has announced that it will win the Delhi Mayor post, while the Aam Aadmi Party has no confidence in its own party members.