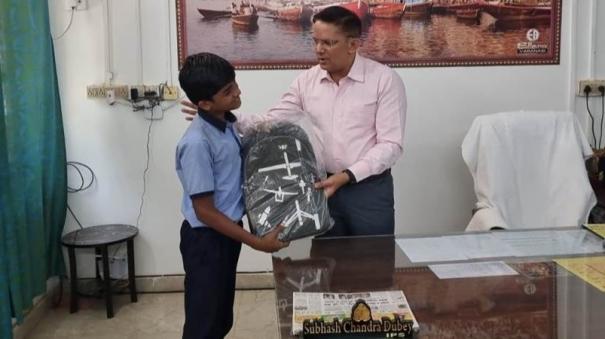 New Delhi: The poor community can be uplifted if the top officials in government service think. An example of this is the recent incident in Varanasi, Uttar Pradesh.

Subhash Chandra Dubey is the Additional Commissioner of Police in Prime Minister Narendra Modi’s Lok Sabha constituency. Pathani was patrolling the gate area in the dark evening a few days ago.

Then he saw a boy named Sonu sitting in the street light with a weighing machine on the side and he stopped the vehicle and went down to investigate. ACP Chandra Dube learns that the boy is studying in the streetlight, unable to attend sixth grade school due to poverty.

ACP Chandra Dube, who wanted to help the boy Sonu to state his position that he would get some money with the help of this weighing machine for his family expenses, enrolled Sonu in a private school called Adarsh ​​Vidyalaya nearby. He also paid a one-year tuition fee for Sonu. He also bought school textbooks for Sonu. Praise has been heaped on this move by ACP Chandra Dubey for flexibility.