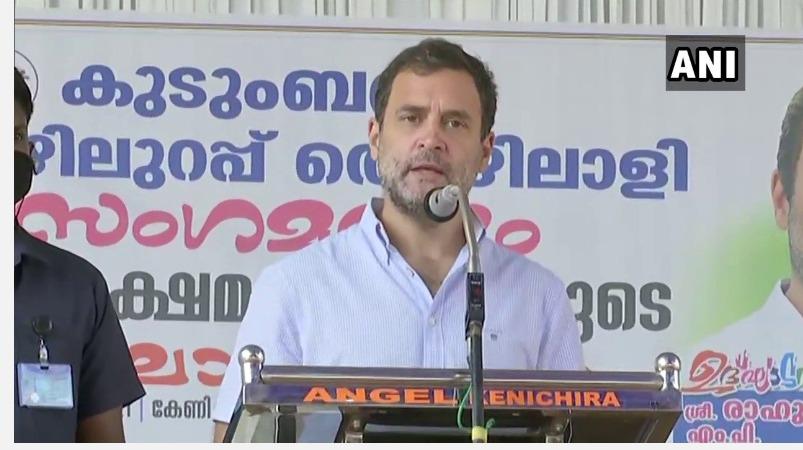 Despite many pop singers commenting on the issue of farmers, the Congress MP said that the central government does not want to solve the problem of farmers. Rahul Gandhi Blamed on the federal government.

Congress MP Rahul Gandhi He has traveled for two days to his constituency Wayanad. In the tractor rally for a distance of 6 km from Trikapatta to Muttil Rahul Gandhi Took part. After that the projects held on behalf of Kudumbasree in Poothadi Panchayat Rahul Gandhi Started.

At the public meeting held there Rahul Gandhi Spoken by:

Mahatma Gandhi Rural Employment Program introduced by the Congress Government Prime Minister Modi He was teased when he took office in 2014.

But at a time when the corona virus was spreading in the country, Prime Minister Modi, by no means, increased the number of working days in the 100-day employment scheme and gave money to the people. The fact that the project worked to protect people during the Corona period Prime Minister Modi Forcibly admitted. The project provided social security and employment to the poor living in rural areas during the Corona period.

The self-help group and the 100-day employment program were introduced during Congress and are not a gift. A tool to empower and empower our people.

Various pop singers from around the world expressed concern over the plight of Indian farmers and commented in support. But the central government does not want to solve the problems of the farmers. If we do not force the central government, they are not going to withdraw these 3 agricultural laws.

The whole world is watching the suffering and hardships of the farmers. But the central government is sitting in Delhi and unable to understand the plight of the farmers.

All the 3 agricultural laws enacted by the Central Government will destroy Indian agriculture. And agriculture as a whole Prime Minister Modi He will give it to some of his friends.

Agriculture is the biggest business in our country. It is worth about Rs 40 lakh crore and millions of Indians are engaged in this agriculture. Agriculture is the only profession of Mother India. But some people want to own that industry.

We will not allow some of Narendra Modi’s friends to take over Bharat Mata’s business. That is why we are in favor of farmers, we Tractor rally We are conducting. We help them. We hope the BJP government will repeal these laws.

Urgent.. Tunisia presents the Arabs with a silver medal in the Tokyo Olympics through Jendoubi

I am such an animal .. lips are like that .. Radhika Apte comments viral

Everyone over the age of 18 should be vaccinated. IMA reference to the Prime Minister