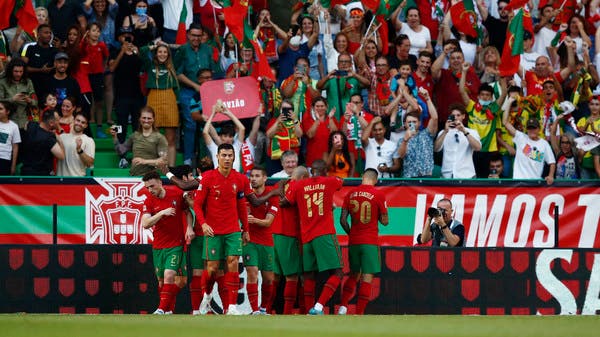 Portugal won its second victory in the group stage of the European Football Championship by beating its guest Czech 2-0 on Thursday, while Spain won its first victory at the expense of Switzerland 1-0 in the second group matches of the first level.

Portugal topped the group with seven points, in front of Spain, the second with 5, and the third Czech, with 4, while Switzerland remained without a score.

Portugal started its advice with a 1-1 draw with its host Spain last Thursday, before it outperformed by four goals, including two goals by star Cristiano Ronaldo, over Switzerland in Lisbon on Sunday.

At the Jose Alvalade stadium in Lisbon, Joao Cancelo 33 and Goncalo Guedes 38 scored the two goals of the match in the first half for the 2019 champions.

In Geneva, Spain scored its first victory with a goal by Pablo Sarabia in the 13th minute.

Last year’s runner-up La Roja drew 2-2 in Czech Republic in its second match, before coming out with three points for the first time.

Sarabia scored the only goal when the Spaniards snatched the ball from a place close to the Swiss area and reached Marcos Llorente, who penetrated to the right and crossed it to the Portuguese striker, Sporting, who followed it into the net.

The teams of this current group will conclude with Spain’s matches with its guest Czech in Malaga on Sunday and Portugal with Switzerland in Geneva on the same day.