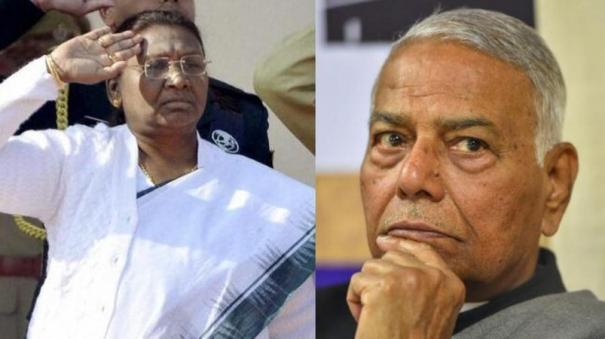 New Delhi: Tribal leader Draupadi Murmu has been declared the candidate of the BJP-led National Democratic Alliance in the presidential election. Former Union Minister Yashwant Sinha is contesting as the common candidate on behalf of the Opposition.

Meanwhile, former Governor of Jharkhand Draupadi Murmu was declared the Presidential candidate on behalf of the National Democratic Alliance last night. This was officially announced by BJP national leader JP Natta. If she wins the election, she will be the first tribal woman to hold the post.

Dhruvpathi Murmu was born on June 20, 1958 in the village of Pythagoras, Mayurbhanj, Orissa. A native of Chandal, she was the BJP MLA for the Rairangpur Assembly constituency from 2000 to 2009. From March 6, 2000 to May 16, 2004, he was a minister in the Biju Janata Dal-BJP coalition government.

On the 15th, 17 parties, led by Trinamool Congress leader Mamata Banerjee, held consultations on fielding a common candidate in the presidential election. Opposition parties have stated they will not run in the by-elections. He denied that he did not want to. Following this, the names of National Conference Party leader Farooq Abdullah and former West Bengal Governor Gopal Krishna Gandhi were considered. They also refused.

In this context, a consultative meeting of the Opposition, chaired by Sarabjit Pawar, was held in Delhi yesterday. Among them are senior Congress leaders Mallikarjuna Karge, Jairam Ramesh, Trinamool Congress’ Abhishek Banerjee and DMK MP. Trichy Siva, D. Raja of the Communist Party of India and Sitaram Yechury of the Marxist Party participated.

Jairam Ramesh read out the joint statement after the meeting. In it, ‘We have chosen Yashwant Sinha as the common candidate in the presidential election. We urge all parties to vote for him. The BJP and its allies must support Yashwant Sinha.

Yashwant Sinha, 84, from Bihar, is an IAS officer. He has been the Minister of Finance and External Affairs in the Union Government. In 2018 he left the BJP and started a new party. He joined the Trinamool Congress in March 2021. He served as the party’s vice president. Yashwant Sinha quit the Trinamool ahead of yesterday’s meeting of the opposition.

The 29th is the last day to file nominations for the presidential election. Yashwant Sinha will file his nomination on the 27th.