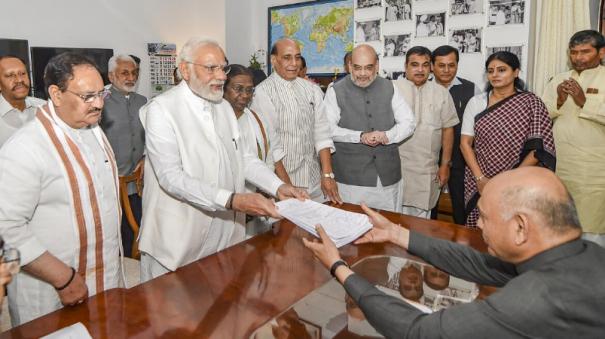 Elections are set for July 18, just before the end of President Ramnath Govind’s term. Draupadi Murmu, a tribal leader from the ruling BJP alliance in the Center, has been declared the candidate.

In this context, Draupadi Murmu filed his nomination today. He was accompanied by Prime Minister Narendra Modi, Union Ministers, various state chief ministers and leaders of some political parties at the election office in the Parliament premises. AIADMK coordinator O. Panneerselvam from Tamil Nadu participated in it.

The victory of Draupadi Murmu is probably considered certain. Because the BJP alliance has 48% of the vote. Naveen Patnaik, the chief minister of the ruling Biju Janata Dal in Odisha, has tweeted his support for Dhruvpathy from their state as the first leader.

Draupadi Murmu, a candidate for the highest office in the country, belongs to the Chandali tribe. Thus, the Jharkhand Mukti Morcha, the ruling tribal party in Jharkhand with the support of the Congress, is also expected to support it.

Andhra Pradesh Chief Minister Jaganmohan Reddy has also announced his support. With the support of so many parties, Draupadi’s victory is considered certain.