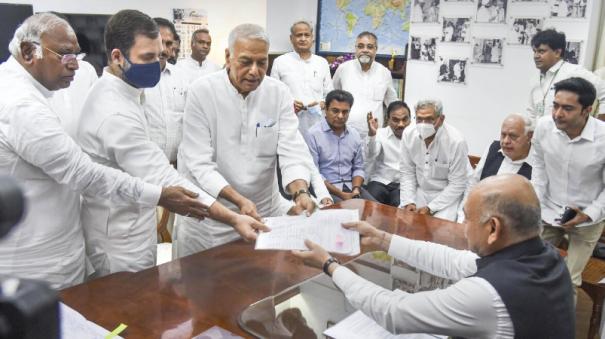 New Delhi: Former Union Minister Yashwant Sinha, who is contesting as the Opposition’s Common Candidate in the Presidential Election, filed his nomination yesterday.

Candidacy for the presidency began on the 15th. The 29th is the last day to file nominations.

Former Jharkhand Governor Draupadi Murmu filed his nomination last Friday as the candidate of the BJP-led National Democratic Alliance in the election.

Meanwhile, former Union Minister Yashwant Sinha was declared the common candidate of the opposition parties including the Congress, the Nationalist Congress Party, the Trinamool Congress and the DMK in the presidential election on the 21st.

Yashwant Sinha pays homage to the statues of Mahatma Gandhi and Ambedkar in the Parliament premises after the nomination.

Former Congress leader Rahul Gandhi told reporters, “All the opposition parties are united in their support for Yashwant Sinha in the presidential election. Although we support the individual, the real conflict is between two ideologies. One, the RSS ideology of anger and hatred. The other is the mercy of all opposition parties. ”

Yashwant Sinha said, “This presidential election is a battle between two ideologies of absolute power and freedom.”

Yashwant Sinha, 84, hails from Bihar. A former IAS officer, he has been a cabinet minister in the Union government headed by former Prime Minister Vajpayee. He left the BJP in 2018 and started a new party. Later, in March 2021, he joined the Mamata Banerjee-led Trinamool Congress and served as the party’s vice-president. He left the Trinamool Congress before being declared the opposition’s common candidate in the presidential election.

The main opposition parties, the Aam Aadmi Party, the Jharkhand Mukti Morcha (JMM) and the Shiv Sena, which is embroiled in infighting, did not participate in Sinha’s candidature.

Who does Hemant support?

JMM participated in the opposition meeting that selected Sinha as its candidate. However, the JMM withdrew from the fray following the announcement of tribal leader Draupadi Murmu as the BJP’s candidate in the by-elections.

In this context, JMM leader and Jharkhand Chief Minister Hemant Soren left for Delhi yesterday. In Delhi, he met Union Minister Amit Shah and senior Congress leader Mallikarjuna Karge. In this context, Hemant Soren is expected to announce in a day or two who he will support in the presidential election.