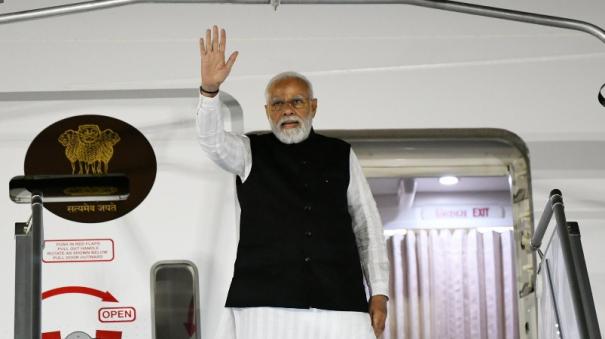 New Delhi: Prime Minister Narendra Modi, who is going to Germany to attend the G7 summit, is reportedly set to attend more than 15 events.

The G7 has 7 members in Canada, France, Germany, Italy, Japan, the United Kingdom and the United States. Germany is hosting its 48th summit. The conference is being held in Schloss Elmaw from today (June 26) until the 28th. German Chancellor Olaf Scholes has invited the leaders of India, Argentina, Indonesia, Senegal and South Africa to attend as special guests. Following this, Prime Minister Narendra Modi is leaving for Germany today to attend the conference.

Prime Minister Modi will attend the 2 sessions of the G7 Summit tomorrow. In the first session, climate, energy and health will be discussed. It has been reported that food security and gender equality will be discussed in the 2nd session.

Travel to the UAE

Also, Prime Minister Modi is scheduled to speak at an event attended by Indians in Munich. After concluding his visit to Germany, Prime Minister Modi will travel to the United Arab Emirates (UAE) to pay his last respects to former President Sheikh Khalifa bin Zayed Al Nahyan.

He is also scheduled to meet and congratulate Sheikh Mohammed bin Zayed Al Nahyan, the new President of the UAE. During his 60-hour overseas trip, Prime Minister Modi is expected to meet more than a dozen world leaders and attend more than 15 events. Prime Minister Modi will return home on the night of the 28th after completing his three-day visit.