“Prime Minister Modi…what is the answer to that first grader?” – Kanimozhi obsession in Lok Sabha 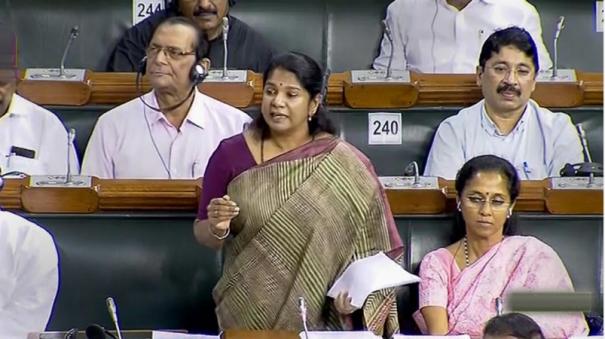 New Delhi: “Why is black money being seized even after economic collapse?” DMK MP Kanimozhi questioned in the Lok Sabha. He gave a long speech in Tamil for the first time while participating in the debate on price hike that began on Monday.

Kanimozhi, MP and DMK group vice-chairman of the Lok Sabha, said: “BJP’s Nishikant Dubey, who can sit and talk now, mentioned black money. He said crores of black money has been seized in non-BJP ruled states. They announced that after demonetization in 2016, black money would disappear. Even after that it would be convenient to tell how black money roams in the country. Because after demonetisation, India has suffered massive economic collapse.

In Tamil Nadu, when the AIADMK, the BJP’s ally, was in power, the policy note called ‘Policy Note’ put by the government in the Legislative Assembly has recorded that 50 thousand small and medium industries have been closed down due to demonetisation.

Many people have died standing in bank queues during demonetisation. This country has faced many hardships due to demonetisation. It was because of their promise that after this there would be no black money that the country accepted demonetisation after all these hardships. But still we read news that black money is being seized.

Why is black money being seized after so much hardship and economic collapse? The government should provide an explanation for this. That would be justice for the dead. This regime has created a situation where the grassroots people live with struggle every day.

Before this government assumed office in 2014, the price of petrol was Rs.71. Diesel Rs.53. LPG cylinder Rs.414. Today, the cylinder is Rs.1,200. Petrol has crossed Rs.100. Diesel price is touching Rs.100. In this country where there are a lot of common people called Aam Aadmi, as you often say, they have to put one liter to three liters of petrol a day. The government reduced the income of MPs due to the spread of Covid. That is fair and we accept it. But private companies halved the salaries of their employees. Many lost their jobs.

The minister said that the price of onion has come down and the price of tomato has come down. Can you eat chutney with onions and tomatoes instead of food? A mother could not even buy food for her children. You told us to give away the quota by saying that we are giving cylinder subsidy. Many have given up. But the reality is that many LPG subsidies do not reach their bank accounts today.

In a report by Azim Premji University, an unprecedented 23 crore Indians are expected to fall below the poverty line. The report also states that 3.2 crore middle-class Indians have been pushed below the poverty line. This is the situation in India. But an Indian businessman has become the fourth richest man in the world. Grows faster than Billcats. Only a few people live here. This is because all tax deductions are given to receiving companies.

I am not saying no career development. But this regime, which is reluctant to give any help to the people who are living at the bottom, is growing and talking about corporations. Even before covid we hit our worst unemployment for the first time in 45 years. Last October we created an environment where 5 million people lost their jobs. What is the future of the country’s youth? The question looms large.

It is definitely not fair for the country to think of running a politics or a government based only on success, failure and vandalism. We make idols as a symbol of unity and beat each other. But what is the justification to divide people in the name of religion, in the name of caste and in the name of language? It should be considered. Here, Member Dubey said, ‘The Reserve Bank is not ready to lend to opposition-ruled states’.

I would like to make just one request. Just pay the outstanding GST amount to the states where you are not in power. Do not give any other loan. Let us create a prosperous state.

What is the answer to the child who says that the price of pencils is also high:

A child has written a letter to Prime Minister Modi today. He wrote in Hindi only. It said, ‘My name is Kriti Dubey and I am studying in class one. Even the price of pencil and rubber that I buy has increased under your rule, Mr. Modiji. The price of Maggi that I eat has also gone up. My mother beats me if I ask for a pencil? What shall I do?’ I have heard that the child. What answer do you have for that child?” he asked.

Following this, the ruling BJP members shouted in opposition to the Kanimozhi speech. Members including Supriya Sule in support of MP Kanimozhi directed the BJP members to ‘stand up and sit down’.

Kanimozhi continued, “What will we do if you do not fulfill any promise? Just now the minister stood up and said, ‘We will not speak when you speak. “Don’t talk while we are talking.” What do we do if even the current promise is thrown into the wind?

Speaking in the Parliament today about the impact of rising prices of essential commodities on the lives of the common people and the increasing inequality in the society. (1/2) https://t.co/8708Preukr

When the price of petrol and LPG was increased during the last UPA regime, Narendra Modi strongly opposed it. This shows the administrative failure of the Congress led government. This will affect crores of Gujaratis, said Modi who was the Chief Minister of Gujarat that day. You are in a position to lower the price of petrol today. Today, the price of petrol and diesel has fallen in the global market. It is regrettable that none of the benefits of that decline have reached the common man who might be here,” said Kanimozhi.