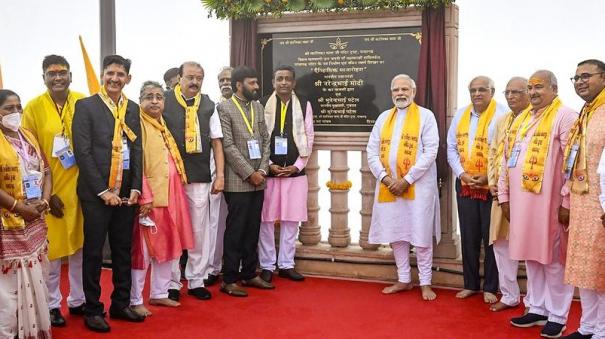 Vadodara: The BJP government in Gujarat is implementing various welfare schemes in the name of ‘Honor of Gujarat’. In this context, Prime Minister Narendra Modi participated in the Gujarat Honorary Project Ceremony held at Vadodara yesterday. He then launched various projects worth Rs 21,000 crore and laid the foundation for new projects.

20 km from Vadodara. The Prime Minister laid the foundation stone for the Central University of Gujarat in the remote village of Kundela. She launched the Rs 800 crore “Chief Motherhood” program to protect the health of pregnant women and children. Under the scheme, pregnant women at Anganwadi Centers will be provided with 2 kg of chickpeas, 1 kg of lentils and 1 kg of cooking oil per month.

Today is Mother’s Day. I adored the mother who gave birth to me in the morning. Next I worshiped Sri Kalika Mother on Bhagwati Hill and received blessings. I have started many projects worth Rs. 21,000 crore by Kalika Mother Asia and laid the foundation for many more projects.

Vadodara is famous as the city of spiritualists. Swami Vivekananda, Aravind, Vinoba Bhave and Ambedkar were inspired by the city of Vadodara. I became the Prime Minister in 2014 by the grace of the Vadodara deities and Kasi Vishwanath.

The Central Government has been working tirelessly for the advancement of women for the last 8 years. Various schemes are being implemented to alleviate the malnutrition of pregnant women and children in particular. Only if a mother is well, will that family be prosperous. The Ujwala scheme provides free cooking gas connection to women. Toilets are being built for women under the Clean India project.

Programs for the advancement of women are being implemented at all levels in Gujarat. Women in villages are given responsibilities.

In most families, financial decisions are made by women. With this in mind Jantan Bank accounts are being started for women. The loan is provided under the Mudra Yojna scheme.

7.5 lakh houses have been built for the poor in Gujarat. 4.5 lakh middle class families have been provided financial assistance to build houses. The education sector in Gujarat will be boosted by the Central University of Gujarat, the Railway University and the Birsa Munda Tribal University. In addition, Gujarat’s industrial sector is booming. The infrastructure of the state is constantly being improved. Thus spoke Prime Minister Narendra Modi.

Inauguration of the renovated Kali Temple

Sri Kali Temple is an 11th century temple located on the Bhagwati Hill in the Panchmahal District of Gujarat. In the last 15th century, the Mughal emperors demolished part of the temple and built a dargah.