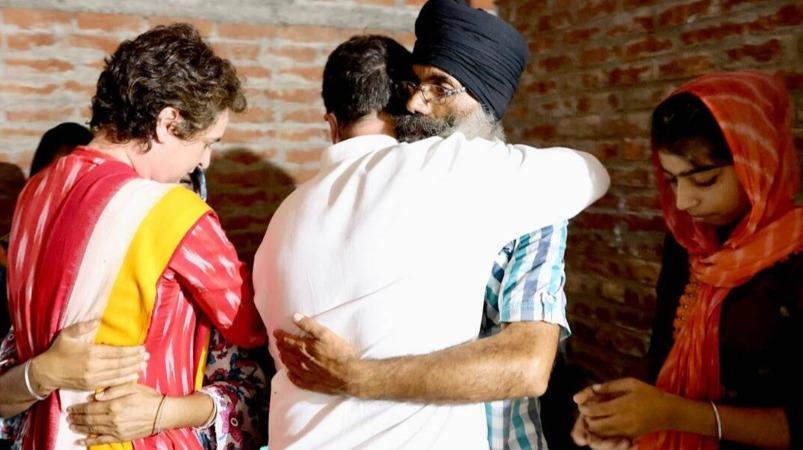 Went to Lakhimpur, Uttar Pradesh Congress Senior Leader Rahul Gandhi, General Secretary Priyanka Gandhi They met the families of the farmers who lost their lives in the violence and expressed their condolences. Then, get all the help they need Congress They promised to deliver.

Lakhimpur in Uttar Pradesh Farmers He was the son of Union Minister Ajay Mishra at the time of the protest Ashish Misra The passing car suddenly crashed into a crowd of farmers. Of which 4 Farmers Died. Four people were killed in the ensuing violence. Another journalist was killed.

In this situation, All India to offer condolences to the families of the deceased farmers Congress General Secretary Priyanka Gandhi Went to Lucknow. Police detained him near Sitapur and later remanded him in custody at the Government Guest House there.

In this situation, Priyanka was persuaded by her brother and Lok Sabha MP to join Barb Rahul Gandhi Arrived in Lucknow yesterday. From there he tried to go to Sitapur via Lakhimpur. However, the Uttar Pradesh police did not allow him to pass through Lakhimpur.

He protested at the airport and engaged in tarna. Accompanying him were Chhattisgarh Chief Minister Bhupesh Bagel and Punjab Chief Minister Saranjit Singh Sunny.

After a while Rahul Gandhi The police allowed the suspects to go to Sitapur. However, they made it a condition that they go in the car they had arranged.

Refusing to accept this, Rahul argued, “Who are you to prepare for my journey? I will go in my car.” Following this, the police allowed him to go to Sitapur in his vehicle. This caused a stir at the airport for some time.

Meanwhile, he was detained at the guest house Priyanka Gandhi He was released yesterday evening. But still, to Sitapur Rahul Gandhi Upon learning that she was coming, Priyanka waited there to meet him. With Rahul, including Vadera Congress Leaders also came there. Priyanka consulted with them for a while.

Then Priyanka, Rahul, Bhupesh Bagel and Saranjit Singh Sunny left for Lucknow. Arriving in Lakhimpur last night, they met the families of the farmers who lost their lives in the violence and expressed their condolences. They then assured that the Congress was ready to provide them with all the assistance they needed.

Chhattisgarh Chief Minister Bagel and Punjab Chief Minister Sunny have announced Rs 50 lakh each to the families of the deceased farmers and journalists.

Lakhimpur District Collector Arvind Kumar Saurasia told reporters, “The families of the two victims were given a check for compensation by the government. The families of the other two farmers are in Byrach district and they will be given relief assistance on behalf of the district collector. ”

As the Lakhimpur violence has caused a stir across the country, the Supreme Court is set to take up the case voluntarily.