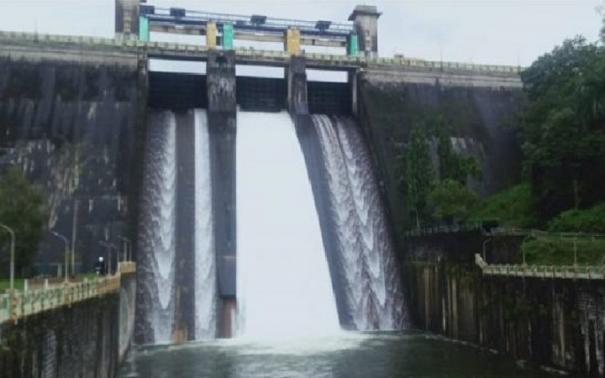 Palakkad: There was a sudden problem in two sluice gates of Parampikkulam dam in Palakkad district of Kerala state and the shutters opened by themselves, causing water to flow out and flood in Chalakudy river. Due to this a warning has been given to the coastal people.

Fixing the shutters and preventing water leakage is the biggest challenge for the Kerala PWD staff. Meanwhile, the sluices of the Beringalkuttu Dam have also been opened and steps have been taken to reduce the pressure on the Parambikulam Dam. The other two sluices of Parambikulam dam have been raised by 10 cm. Similarly, the Kerala government has also requested the neighboring state of Tamil Nadu to open the gates of the channels that supply them with water.

Parambikulam dam in Palakkad district is the main source of water for the people of Coimbatore in Tamil Nadu. This dam is also maintained by the Tamil Nadu government. In this case, fishing in the rivers and operation of tourist boats have been suspended in Palakkad and Thrissur districts as the sluices have opened on their own and flooded. As of now, it seems that 20,000 cubic feet of water is coming out per second.

Regarding the incident, Chalakudy MLA K. Saneesh said, “The situation is under control. There is no need to panic. But vigilance is necessary. Immediately after the problem in the sluices came to light around 1 am, the nearby villages were informed and the people were evacuated safely and kept in safe places.” Experts have said that since there is no rain in the catchment areas of the dam, the situation is conducive to carry out the renovation work.