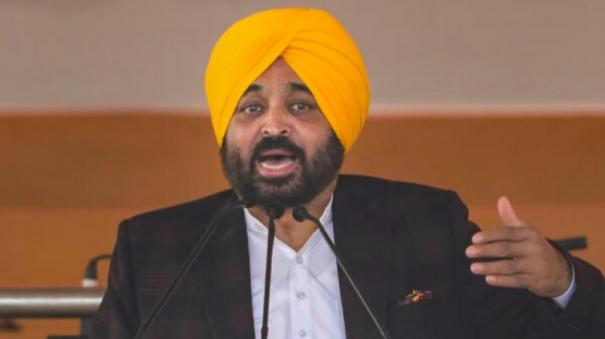 Chandigarh: In the state of Punjab Punjab civil service officers, who have been on a general emergency leave since Monday, have announced that they will call off their strike. Earlier, Chief Minister Bhagwant Mann had issued a warning to the striking employees to return to work by Wednesday afternoon.

Narinder Singh Dhaliwal was appointed as the Transport Officer of Ludhiana, Punjab. He was arrested last Friday by the state intelligence agency on charges of taking bribes from motorists involved in illegal activities. The move was condemned by the State Civil Service Officers Association. For this, in the meeting held on January 8, a resolution was passed that the state government official has been arrested illegally, wrongly and arbitrarily without following proper procedures. Also, it has been decided that all state government officials in the state should take a one-week contingency leave and protest from January 9.

Taking leave and protesting: Accordingly, all the government officials of the state took leave from Monday and were protesting. Revenue department employees also supported their protest and participated in the protest. Government work in the state was affected due to this.

Chief Warning: After this, he should return to work by 2 pm on Wednesday. Punjab Chief Minister Bhagwant Mann had warned that action would be taken against violators. In this regard, he posted on Twitter, “It has come to my attention that some officers are not coming to work under the guise of strike. They are all protesting against the strict action taken by the government against a corrupt official.

Let me make it clear that this government is anti-corruption. Protesting in this manner is tantamount to threatening the government and inciting riots. No responsible government will tolerate this. Therefore, this strike is illegal. Government servants who do not return to duty by 2 PM today (Wednesday) i.e. 11.01.2023 PM will be dismissed. He will be treated as absent on the days he does not report to work,” the Chief Minister had said.

Withdrawal: As the deadline announced by the chief minister approached, Punjab civil service officials announced that they would withdraw their leave strike and return to work. This was jointly announced by Punjab Civil Service Union President A. Venuprasad and Co-President Rajat Oberoi.

No one will be spared in the case of corruption, whether it is a minister, a sentry or any of my associates…every single penny of the public will be accounted for.. pic.twitter.com/bzc3aYGO9N