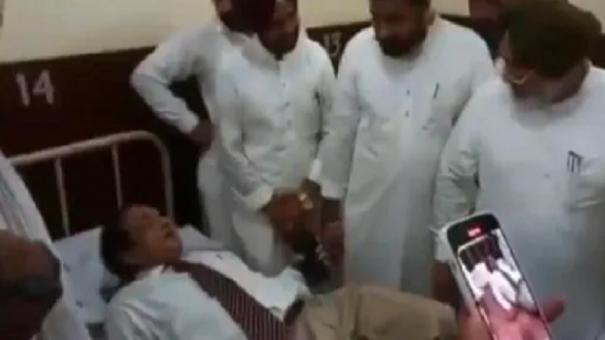 Punjab Health Minister Chetan Singh Joramja. He conducted research at Fareed Medical University yesterday. The minister alleged that the beds there were unsanitary. Then he suddenly forced the Vice-Chancellor Doctor Raj Bahadur who was with him to lie on the patient’s bed. The bed was dirty. Dean lay back on the bed for a few seconds and got up due to the minister’s compulsion. These scenes were broadcast on television news. After this the Vice-Chancellor resigned from his post.

Pointing out this incident, the opposition parties including the Congress and the BJP are criticizing the Punjab Health Minister and the Aam Aadmi Party.

Dr. Raj Bahadur, is an expert spine surgeon. In this case, the opposition parties say that forcing Minister Dean to lie on a dirty bed after questioning about the hospital hygiene is a reprehensible and humiliating act.

In this regard, Pawan Kumar Bansal of the Congress party posted on his Twitter, “Medical university vice-chancellor does not need to answer to such rude ministers. He is responsible only to answer directly to the chancellor.”

In a tweet posted by BJP’s Manjinder Singh, “The action of the Health Minister is disgusting. He has insulted the University Vice Chancellor. He has proved how an uneducated minister can behave. Is this the kind of change Arvind Kejriwal wanted to bring?”

The Aam Aadmi Party registered a landslide victory in the last assembly elections in Punjab by defeating the ruling party. Bhagwant Mann of the party took charge as the Chief Minister of Punjab.

In this case, the action of the Punjab Health Minister has sparked controversy.