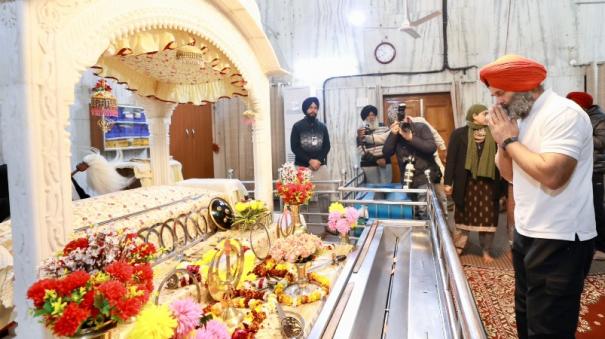 Congress chief Rahul Gandhi began his India Unity Pilgrimage from Sirhin area in Punjab’s Fatehgarh Sahib district on Wednesday. For this he reached Sirhind on Tuesday evening itself. Before starting the pilgrimage on Wednesday morning, he visited the Gurdwara at Fatehgarh Sahib and offered prayers.

In this regard, the Congress posted a photo of Rahul Gandhi sitting in a Gurdwara on its official Twitter page and said, “I have come to your feet to pray for happiness, peace, prosperity, brotherhood, love for the nation… I will not return empty-handed.

With your blessings I will spread the message of love in the land of Punjab for a few more days.”

Later, the pilgrimage started from Sirhind area on Wednesday morning. A tricolor flag handover event takes place during the Yatra. Starting from Sirhind region, the India Unity Yatra travels through Mandi Gobindgarh, Khanna, Sahnewal, Ludhiana, Koraya, Bhagwara Jalandhar, Daswan and Mukheryan in Punjab. A rally will be held in Pathankot area on January 19 before entering Jammu and Kashmir.

Earlier, Rahul Gandhi offered prayers at the Golden Temple in Punjab’s Amritsar on Tuesday. It is noteworthy that he also participated in the bhajan held there.