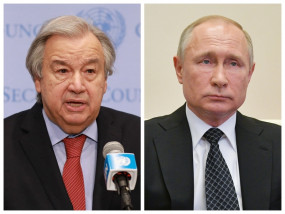 Digital Desk, Moscow. Russian President Vladimir Putin and UN Secretary-General Antonio Guterres discussed the issue of grain exports during a telephonic conversation. This was informed by the Kremlin in a statement.

The main emphasis has been placed on the implementation of the Istanbul package agreements on the export of Ukrainian grain from the Black Sea ports, as well as on the export of Russian food and fertilizers, the statement said on Wednesday.

During the phone call, the UN chief expressed his full commitment to resolve the issue and to remove all obstacles to further advance the supply of Russian agricultural products and fertilizers to world markets, Xinhua news agency reported. The measures taken by the Secretariat and specialized agencies of the United Nations were explained in detail.

According to the statement, the two sides also discussed the situation around the Zaporizhzhya Nuclear Power Plant in the context of the International Atomic Energy Agency’s visit on 1 September.