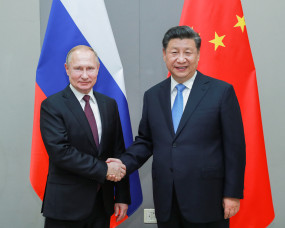 The BBC reported that the Russian leader met his counterpart at a summit in Samarkand, Uzbekistan, where he condemned efforts to create a unipolar world. Xi said China is ready to work with Russia as a great power. China has not supported Russia’s invasion, but trade and other relations with Moscow have grown steadily since it was launched.

The two leaders are meeting on the sidelines of the Shanghai Cooperation Organization (SCO) summit at a crucial point in the Ukraine war, where Russian troops have lost ground in parts of the country in recent days. During their last meeting in February, when Putin traveled to Beijing for the Winter Olympics at Xi’s invitation, the two sought to demonstrate their close ties.

A few days later, Russia invaded Ukraine and threw Sino-Russia relations into an intense spotlight, prompting international condemnation and sanctions against Moscow. Beijing has since urged an end to hostilities and stressed the importance of sovereignty, but has consistently denied calling the war an invasion by Russia, whose leaders refer to it as a special military operation.

In recent weeks, China has sent troops to participate in joint military exercises with Russia and sent senior officials to meet with Russian counterparts to confirm their close ties. The BBC reported that it has also come to Russia’s financial aid in times of punitive sanctions by the West. It has been a win-win deal for both the countries. With Europe reducing its reliance on Russian oil and gas, China has increased its purchases of energy products, which it is reportedly getting at subsidized rates.