Putin threatens ‘lightning strike’ against any intervention in Ukraine’s war 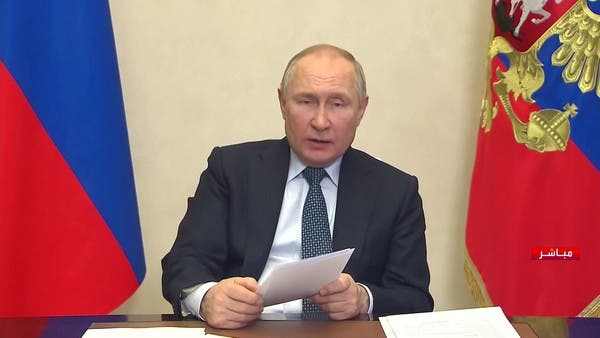 Russian President Vladimir Putin threatened, on Wednesday, to launch a “thunderbolt” against any party trying to intervene in the current war with Ukraine, stressing the West’s failure to split ranks inside Russia.

Putin stressed that “all special military operations in Ukraine will be carried out to ensure our security.”

The Russian president added, in a speech before the Russian parliament in St. Petersburg, on Wednesday, that Russian military operations in Ukraine will continue “to ensure the security of citizens in Lugansk and Donetsk.”

From the Russian army in Ukraine (Reuters)

He said that “attempts to strangle Russia economically have completely failed”, in the wake of Western sanctions that were imposed on Moscow, after the outbreak of war in Ukraine on February 24.

Putin stressed that the West is trying to make Ukraine an archenemy of Russia, which is facing unprecedented strategic threats, pointing to his country’s ability to overcome all difficulties.

On Tuesday, Russian President Putin told UN Secretary-General Antonio Guterres in Moscow on Tuesday that he still had “hope” in talks with Ukraine to end the war between the two countries.

“Despite the fact that the military operation is continuing, we still hope that we will be able to reach a positive result” from the negotiations, Putin added to Guterres.

Sitting across from Guterres at a long table in the Kremlin, Putin said efforts in talks with Ukraine had been stymied by Kyiv’s accusations of atrocities in the town of Bucha near Kyiv.

He continued, “There was a provocation in the village of Bucha that the Russian army had nothing to do with. We know who was behind this provocation, by what means it happened and what kind of people participated in it.”

Putin told Guterres that he was aware of his concerns “about the Russian military operation” in Ukraine and was ready to discuss them, but he attributed the unrest in his neighbor to an “anti-state coup” that toppled its pro-Russian president in 2014.