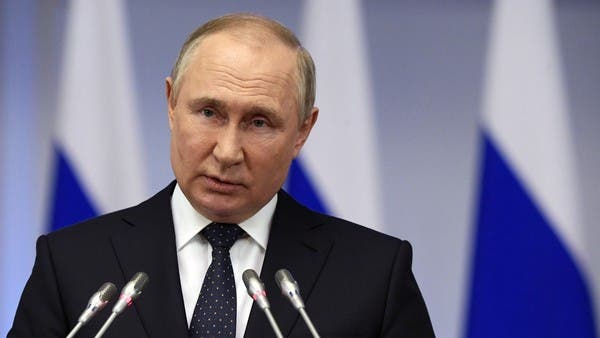 Russian President Vladimir Putin said on Sunday that the war in Ukraine is similar to the war against Nazism in World War II, adding that victory in Ukraine is ours as it was in 1945.

“Today our soldiers, like their ancestors, are fighting side by side to liberate their land from Nazism, with the confidence that victory will be ours as in 1945,” he said in congratulating the former Soviet bloc countries and the two breakaway regions of eastern Ukraine.

“Preventing the Return of Nazism”

He also added that “the common duty today is to prevent the return of Nazism, which caused so much suffering to the peoples of different countries,” wishing that “new generations are worthy of the memory of their fathers and grandfathers.”

Putin did not only refer to the soldiers, but also spoke of the civilians on the “home front” who “crushed Nazism with countless sacrifices.”

‘Prevent them from returning for revenge’

He also said in a paragraph dedicated to the Ukrainians, “Unfortunately, today Nazism raises its head once again.” “Our sacred duty is to prevent the ideological heirs of those who were defeated” in what Moscow calls the “Great Patriotic War” from “returning for revenge,” he added.

On the other hand, Ukrainian President Volodymyr Zelensky gave a moving speech on the anniversary of Victory Day, and said that evil had returned to his country.

He also said in a video message, today, Sunday, in front of a 9-storey house that was completely destroyed by Russian missiles, that “Russia killed more than 20 thousand Ukrainians during this war.”

He considered that “the life for which the soldiers fought in that world war ended on February 24, when the Russian forces entered his country.” “Evil has returned again, in a different form and under different slogans, but for the same purpose,” he added.

It is noteworthy that Victory Day, which falls on the ninth of May, is for Russia one of the most important national events in the country, especially as it embodies the memory of the enormous sacrifices made by the Soviet Union in order to defeat Nazi Germany.