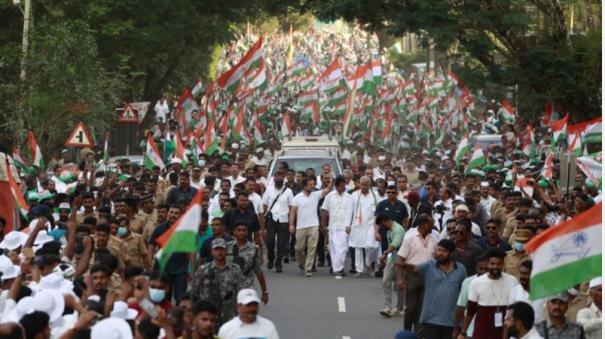 An article in this regard has been published in Shiv Sena’s official magazine ‘Samna’. Its author and Shiv Sena’s national spokesperson Sanjay Raut has posted his comments in support of Congress’s Rahul Gandhi. Sanjay wrote in praise of Rahul’s unity yatra, and the Shiv Sena is also believed to have backed Rahul as its prime ministerial candidate in the 2024 elections after Bihar Chief Minister Nitish.

Regarding this, Sanjay said in Samna, “Rahul Gandhi is conducting Padayatra to unify the country. There are chances of success. I hope our country will be free from fear from this year 2023. An attempt was made to stop Rahul’s new dynamism in Delhi, which started from Kanyakumari and covered a distance of 2,800 km. “Rahul Gandhi is going to continue the Yatra successfully,” he said.

Rahul, who is on a pilgrimage, was wearing only a t-shirt in the bitter cold, which sparked outrage. Especially his visit to the Vajpayee memorial with a t-shirt was a topic of discussion. Regarding this, Sanjay Raut said, “Rahul’s response to the controversy regarding wearing a bare t-shirt in extreme cold is touching. His response as to why this question is not asked to the poor laborers and farmers is right.”

As Shiv Sena’s Sanjay Raut had said earlier, Nitish, the leader of the United Janata Dal, had said the same. Thus, it is considered that Rahul is the prime ministerial candidate for the 2024 Lok Sabha elections.