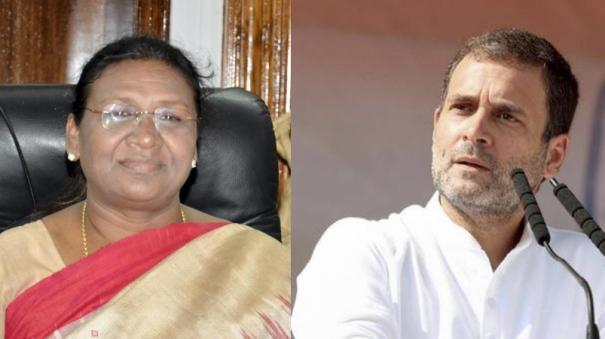 New Delhi: National Democratic Alliance candidate Drarubathi Murmu has been elected as the 15th President of the country. In this case, Rahul Gandhi, Member of Parliament of the Congress Party, congratulated him.

As the current President Ram Nath Kovind’s term ends on the 24th, a new presidential election has been announced. Former Jharkhand Governor Dravupati Murmu on behalf of the BJP alliance and former Union Minister Yashwant Sinha on behalf of the opposition parties were announced as candidates.

The election was held on the 18th. Polling centers were set up in Parliament and all state legislatures. The votes recorded in this were sealed in the ballot box and sent to Delhi. Counting of votes was held on Thursday. In this, Drarubathi Murmu has been elected as the next President by getting a majority of votes.

Leaders of various political parties, including Prime Minister Modi, are congratulating Drarubathi Murmu, who will soon be sworn in as the President of the Republic. Former president of the Congress party Rahul Gandhi also congratulated him.

Rahul Gandhi tweeted, “Congratulations to Drarubathi Murmu on his election as the 15th President of India.”

Congratulations and best wishes to Smt. Droupadi Murmu ji on being elected as the 15th President of India.