Rahul Gandhi, who appeared before the Enforcement Branch for the 2nd day: Congress workers arrested during the rally. 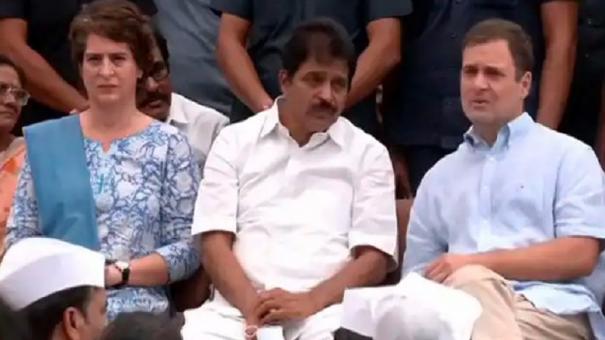 New Delhi: Enforcement officials in Delhi yesterday held a serious inquiry into senior Congress leader Rahul Gandhi over the sale of shares in the National Herald newspaper. In this case, today (June 14) he is appearing for the 2nd day.

Prolonged struggle for the 2nd day: Earlier, Rahul Gandhi and his sister Priyanka Gandhi visited the Congress headquarters. Congress leaders and volunteers then chanted slogans in support of him. Many senior leaders, including KC Venugopal, were present.

Some senior leaders, including Harish Rawat and Randeep Singh Soorajwala, marched towards the Enforcement Department office. They were all taken into police custody. Some were forcibly loaded into vans. Barriers were erected across the Grand Old Akbar Road.

A total of 144 restraining orders were issued in the areas where the Congress party office is located. All the Congress volunteers and dignitaries who came in the car were stopped from going to the party office. The Congress party protested. They were involved in an argument as to why you were being stopped even if you went as a person in a separate vehicle.

Yesterday 10 o’clock hearing: Rahul Gandhi, who appeared before the court on the first day, was questioned for about 10 hours yesterday. About 25 questions were asked. All were purchased by replying in their own handwriting. The investigation has started for the second day today

In this context, the Congress said, “Rahul Gandhi is asking the central government various questions. He is questioning the Chinese occupation, rising inflation, the Pandemic, the plight of migrant workers in the curfew, the peasant struggle, the religious violence. So the BJP fears him. That fear is targeting him and throwing cases.” Spokesperson Randeep Soorajwala criticized.

Case Background: The Associated Journals Association (AJL) was started by former Prime Minister Jawaharlal Nehru before the country’s liberation. The National Herald was published on behalf of the organization. The Congress party has lent Rs 90 crore to the newspaper as it has been running at a loss for the past few years. However, the National Herald was shut down.

Then in 2010 the shares of Associated Journals were transferred to Young India. Congress President Sonia Gandhi and Rahul Gandhi own 76 per cent stake in the company. BJP senior leader Subramanian Swamy has filed a case alleging irregularities in the share exchange. A case related to this is pending in the court.