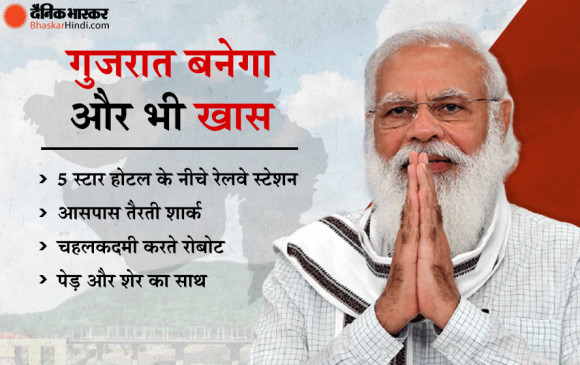 Digital Desk, Varanasi. Prime Minister Narendra Damodar Das Modi is on a visit to his parliamentary constituency Varanasi today (Thursday). PM Modi has given Rs 1500 crore to Varanasi in view of the 2022 Uttar Pradesh assembly elections. PM Modi laid the foundation stone of several projects from the stage of ADV Ground of IIT BHU. Let us tell you that the BJP is preparing to lay the political chessboard with the hands of PM Modi. After seven months, PM Modi is on UP tour. With this visit, the exercise of creating an atmosphere in favor of BJP has started. Political experts say that PM Modi will visit some district of UP every month regarding this visit of PM Modi, which is being linked to the assembly elections.

PM Modi’s address at Rudraksh Convention Center
PM Modi said, today several development schemes worth hundreds of crores have been inaugurated and foundation stone has been laid in Kashi and now Varanasi International Cooperation and Convention Center ‘Rudraksh’ has been inaugurated. When the world came to a standstill during the Corona period, then Kashi became restrained, disciplined as well, but the stream of creation and development continued to flow. These dimensions of development of Kashi, this ‘International Cooperation and Convention Center – Rudraksh’ today are the result of this creativity, this dynamism.

PM Modi said, there is one more person in today’s event, whose name I cannot forget. Another friend of mine from Japan – Shinzo Abe. I remember, when Shinzo Abe ji came to Kashi as Prime Minister, I had a discussion with him on the idea of ​​Rudraksh. Be it strategic area or economic area, Japan is one of the most trusted friends of India today. Our friendship is considered to be one of the most natural partnerships in the entire region.

PM Modi said, India and Japan think that our development should be linked with our gaiety. This development should be all-round, it should be for all, and it should be all-encompassing. Song, music and art flow from Rome and Rome in Banaras. Here on the ghats of the Ganges so many arts have developed, knowledge has reached the summit and there have been serious thoughts related to humanity. Therefore, Banaras can become a huge global center of music, religion, spirituality and knowledge and science. In the last 6-7 years, a lot of work has been done in the direction of strengthening the handicrafts and crafts of Banaras. With this, Banarasi silk and Banarasi craft are getting a new identity again.

PM Modi inaugurated the Rudraksh Convention Center. Tree plantation was done in the campus before the inauguration. The state-of-the-art Rudraksha Convention Center is a unique example of Japanese and Indian architecture.

Addressing the public meeting, Prime Minister Narendra Modi said, “Today I have got the opportunity to lay the foundation stones and inaugurate projects worth more than 1,500 crores related to the development of Kashi. Whatever is happening for the development of Banaras is continuing only with the blessings of Mahadev and the efforts of the people of Banaras. PM Modi said, the last few months have been very difficult for all of us. The changed and dangerous form of the corona virus attacked with full force. But UP, including Kashi, faced such a big crisis with full potential.

PM Modi said, the way UP handled the second wave of corona in the country’s largest state, whose population is more than dozens of big countries of the world, it is unprecedented to prevent the spread of corona infection. I am especially grateful to my colleagues from Kashi, from the administration here to the entire team of Corona warriors. The way you created arrangements in Kashi by mobilizing day and night, it is a great service. Today Uttar Pradesh is the state with the highest testing of corona in the entire country. Today Uttar Pradesh is the state with the highest number of vaccinations in the entire country.

PM Modi said, today there is an unprecedented improvement in medical infrastructure in UP, whether it is village health center, medical college, AIIMS. Till 4 years ago, where there used to be a dozen medical colleges in UP, their number has now increased to almost 4 times. Today Kashi city is becoming a very big medical hub of Purvanchal. For the treatment of diseases which once had to go to Delhi and Mumbai, their treatment is also available in Kashi today. At present, the work of building about 550 oxygen plants is going on in full swing in UP. Today 14 oxygen plants have also been dedicated here in Banaras.

PM Modi said, today some more links are being added to the medical infrastructure of Kashi. Today Kashi is getting new hospitals related to the medicine of women and children. Out of this, 100 beds capacity is being added in BHU and 50 beds in district hospital. Large LED screens being installed all over the city and technology-equipped information boards on the ghats will be of great help to the visitors to Kashi. These facilities, which present the history, architecture, craft, art, every such information of Kashi in an attractive way, will be of great use to the devotees. The aarti to be held at Ganga ji’s Ghat and at Kashi Vishwanath temple through big screens will be broadcast throughout the city. I will be possible.

PM Modi said, Uttar Pradesh is emerging as the leading investment destination of the country. Till a few years ago, UP, which was considered difficult to do business in, today UP is becoming a favorite place for Make in India. The special fund of Rs 1 lakh crore that has been created for modern agricultural infrastructure in the country will now benefit our agricultural markets as well. This is a big step towards making the system of agricultural markets of the country modern and convenience-rich.

PM Modi said, I am discussing so many works of development of Kashi and entire UP for so long, but this list is so long that it will not end so soon. When there is a shortage of time, many times we have to think about which development works of UP, which works should I leave. It is not that before 2017 schemes were not available for UP, money was not sent! Even then there were so many swift efforts from Delhi. But then in Lucknow they used to get blocked. Today Yogi ji himself is working hard.

PM Modi said, today there is rule of law in UP. The mafia raj and terrorism, which were once becoming uncontrollable, are now under the grip of law. The way parents always lived in fear and apprehensions regarding the safety of sisters and daughters, that situation has also changed. Today the government in UP is run by development not on corruption and nepotism. That is why, today in UP the benefits of the schemes of the people are directly going to the public. That is why, today new industries are being invested in UP, employment opportunities are increasing.

Under the leadership of PM Modi ji, Kashi has made a new identity in front of the country and the world, the new Kashi today as a smart Kashi remains a model for the state and the world: UP CM Yogi Adityanath pic.twitter.com/MohMlEKx5J

The Prime Minister landed in Varanasi a short while ago. He received at the airport by UP Governor Smt. @anandibenpatel, CM Shri @myogiadityanath and other dignitaries as well as officials. pic.twitter.com/DmwyAwL9tN

Main projects to be launched

Main projects to be laid