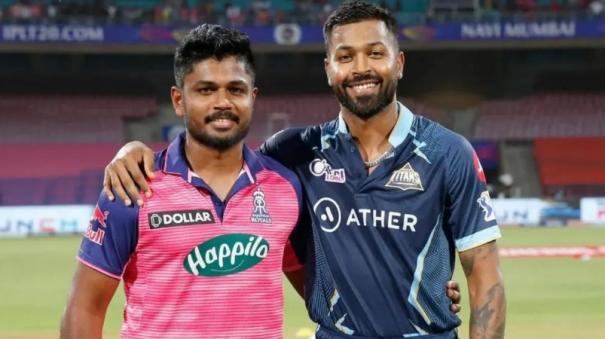 Kolkata: Gujarat – Rajasthan teams will clash in Kolkata tonight at 7.30 pm in the first qualifying round of the play-off round of the IPL T20 cricket series. Debutants Gujarat topped the league round with 20 points.

For the first time as captain, Hardik Pandya has been leading the team brilliantly, making excellent contributions in both batting and delivery. Rashid Khan, who gives crisis to the opponent by spin, has also been seen as a strengthening batsman. The action of David Miller and Rahul Diwatia is also a strength. However, Schupmann Killin’s form in the top order is of some concern. Rithiman Saha, meanwhile, has been acting confidently in the last few games.

Ulzari Joseph, along with Mohamed Shami, who has taken more than 11 wickets this season in the power play at the crack, are ready to put pressure on the opposing batsmen of the Lucky Ferguson alliance. Rajasthan, led by Sanju Samson, finished second in the league with 18 points. Rajasthan are strong in the spin in terms of bowling. Yuvendra Sahal is active in taking wickets and Ravichandran Aswin in controlling run accumulation.

The qualifying round 1 and eliminator matches of the play-off round of the Super Over IPL series, which will determine the victory, will take place today and tomorrow in Kolkata. Both these games are likely to be affected by rain. In this situation, the IPL management has announced the rules to be followed if the play-off round matches are affected by rain. According to this, the winner will be determined by which team has taken the lead in the league round if the qualifying round 1, eliminator, qualifying round 2 and final match are abandoned without throwing even an over.

The final takes place on the 29th. The match will be played the next day (30th) if it is affected by rain that day. The final and the pre-qualifying round 2 match will be played in Ahmedabad. Eliminator, two qualifying round matches can be reduced to 5 overs if required due to rain. If it is not possible to plan to finish the 5 over match, the Super Over will be observed to determine the winner if conditions permit. Whichever team takes the lead in the league round will be considered the winner if the situation prevails where the Super Over cannot be held.

Two qualifying rounds, the Duckworth-Lewis method will come into effect if he finishes one innings in the eliminator but does not play in the second inning. He was out for a single in 3 games. Similarly Sanju Samson became Shimran Hedmeyer
No big innings emerged from Yor. Since the play-off round they can act responsibly.