Rakitic gives Sevilla the lead… and Atletico win with difficulty 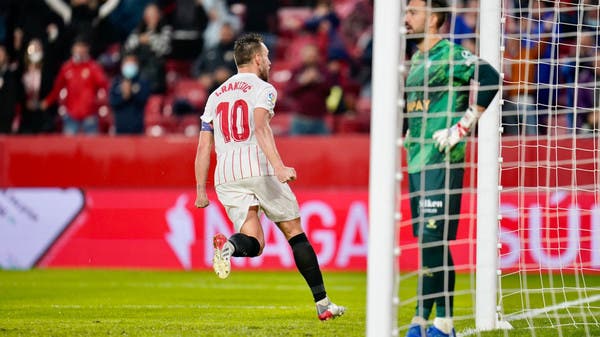 Croatian Ivan Rakitic saved Sevilla from a third loss this season, by scoring a last-gasp goal against Deportivo Alaves 2-2, giving the Andalusian team a temporary lead, in the fourteenth stage of the Spanish Football League.

Alaves was a race to open the scoring through Victor LaGuardia (5), before Argentine Lucas Ocampos equalized the score (38).

Alaves returned and advanced before the end of the first half through a penalty kick translated by Joselo (45 + 7), until Rakitic equalized for the Andalusian team (90 + 2).

With this tie, Seville managed to get a point and temporarily take the lead with 28 points, with a goal difference from Real Sociedad, who faces Valencia on Sunday, and a point from Real Madrid, who plays on Sunday in Granada. For his part, Alaves raised its score to 14 points in 14th place.

In a second match, defending champion Atlético Madrid won a hard-fought victory against its guest Osasuna 1-0, with a goal scored by Brazilian Felipe. Colchoneros tried to reach the visitors net in the first half without a result, despite several attempts.

The defending champion waited until the second half, specifically the 87th minute, after Felipe headed for a corner from Belgian Yannick Carrasco, who scored.

Carrasco himself almost added the second goal, taking advantage of the advance of the Osasuna goalkeeper to increase the number. He dribbled him in the middle of the field on his way back to the goal, and shot from afar, but the ball hit the right post (90 + 2).

With this difficult victory, Argentine Diego Simeone’s men maintained their fourth place in the “Liga” with 26 points, while Osasuna remained eighth with 19 points. Barcelona will play later with Espanyol in the Catalan derby.