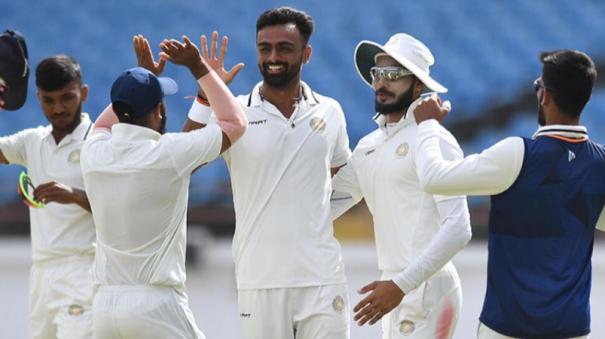 Rajkot: The fourth round of the ongoing Ranji Trophy series is currently underway. In the first innings against the Delhi team, Saurashtra captain Jaydev Unathgat bowled 12 overs and took 8 wickets. It also includes a hot-trick.

The 31-year-old Unathkat recently played in the Test series against Bangladesh. After returning to India in this context, he is participating in the Ranji Trophy series. A left-arm bowler, there is an expectation that he will get a chance to play in the Test series with the Australian team.

Despite all that, he is focusing his attention on local cricket. Delhi and Saurashtra in Group-C are playing at the cricket ground in Rajkot. Delhi won the toss and elected to bat. This competition started today.

It is noteworthy that Deepak Tabola from Uttarakhand took 8 wickets by giving only 35 runs in just 8.3 overs in the current season.