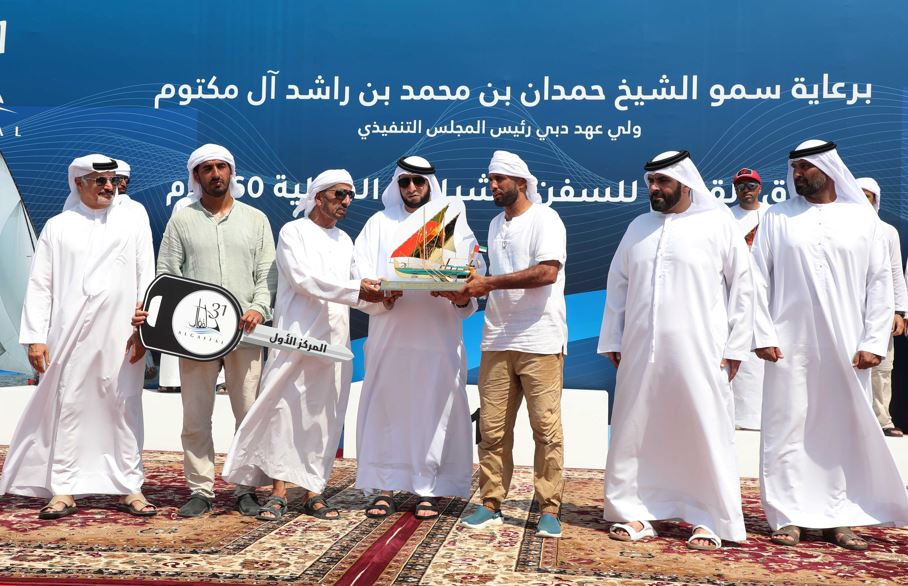 Sheikh Rashid bin Hamdan bin Rashid Al Maktoum, President of the Al Nasr Cultural and Sports Club, crowned the crew of the ship Hashim 199, owned by Sheikh Zayed bin Hamdan bin Zayed Al Nahyan, and led by Enkhuda Hassan Al Marzouki, as the champion of the 31st edition of the Al Qaffal Race for 60-foot local sailing ships, which was held under the patronage of His Highness Sheikh Hamdan bin Mohammed bin Rashid Al Maktoum, Crown Prince of Dubai, Chairman of the Executive Council, and the organization of the Dubai International Marine Sports Club today.

Sheikh Rashid bin Hamdan bin Rashid Al Maktoum handed over to the crew of Hashim 199 the golden model and the car key. The crew of the boat Atlas 12 also handed over to its owner Ahmed Rashid Al Suwaidi the silver model for the second place owners, and a car key, while the crew of the ship received the description 87 to its owner, His Highness Sheikh Hamdan bin Mohammed Bin Rashid Al Maktoum, and led by Sheikh Mohammed Al Marri, a bronze model and a luxury car.