Rashid bin Humaid: The league title for the 14th time is a well-deserved achievement for Al Ain 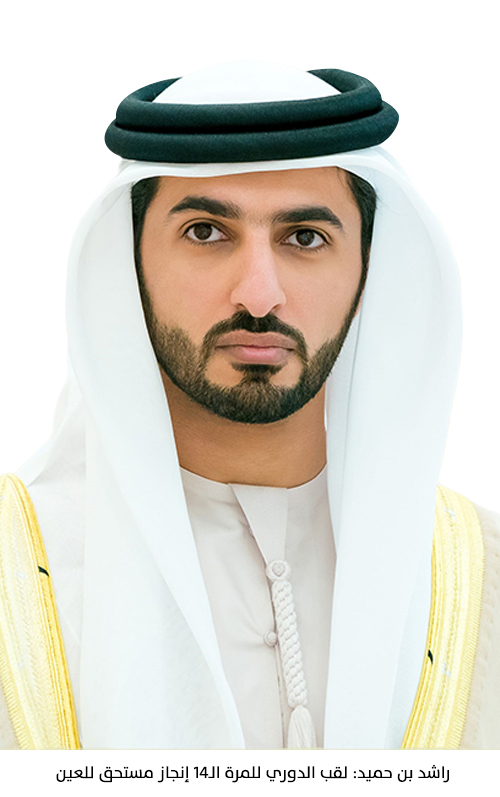 Sheikh Rashid bin Humaid Al Nuaimi, President of the Emirates Football Association, extended his warmest congratulations and blessings to the Board of Directors of Al Ain Club and to all Al Ain fans on the occasion of crowning Al Ain team with the title of “ADNOC Professional League” for the fourteenth time in its history, after winning the title of the current season 2021-2022, before Three rounds at the conclusion.

He also congratulated the football company, the technical and administrative staff, and the team’s players for crowning their efforts throughout the season with the deserved title, stressing that the support and directives of the club’s leadership had a prominent impact and direct impact on the stability of the team, which led to the distinguished performance, and the entitlement to early win the league title for merit.

Sheikh Rashid bin Humaid Al Nuaimi indicated that the achievement of the new club confirms the professional approach (administrative and technical) that it follows in the path of Al Ain’s participation in the official football benefits, in addition to its effective and supportive plans for the team’s achievement, which contributes to raising the level of competition and supports the level of football competitions. Football at the state level, and serves its position on the continental and international levels.

Sheikh Rashid bin Humaid Al Nuaimi expressed his thanks and appreciation to all the teams that participated in the league and entertained football lovers with a spirit of sportsmanship and competition that contribute to strengthening the popularity and status of this sport in the UAE. His Highness wished the team success during its upcoming participation in championships, and local, regional and continental competitions.