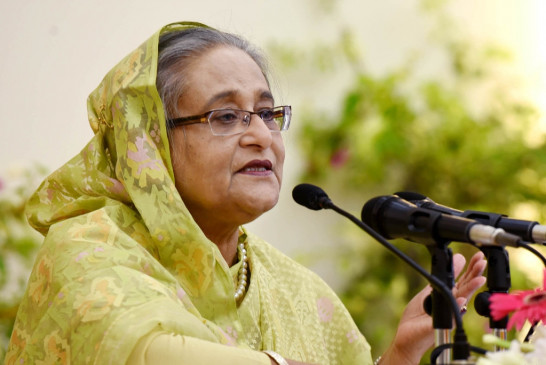 digital desk,Dhaka. Bangladesh Prime Minister Sheikh Hasina has said that her country is ready to face the challenges of the return of the Taliban to power in Afghanistan.

Hasina said, there is nothing to be worried about Afghanistan. At a time when the Taliban is emerging, many have received training from Afghanistan to spread terrorism to Bangladesh.

We are ready to face such challenges. We have to be vigilant so that Bangladesh is not affected by the change of power in this SAARC country.

Sheikh Hasina also said that there should be an inquiry into the indiscriminate killing of armed forces officers during the dictatorship of Ziaur Rahman, the military ruler and founder of the opposition Bangladesh Nationalist Party (BNP).

Around 2,000 armed forces officers were killed, he told reporters at a virtual briefing from his official residence Gan Bhavan. As the demand for probe into the murder has been raised, I feel that a step should be taken in this regard. He also told reporters that public opinion should also be taken into account in this process.

Hasina criticized the BNP for its relentless efforts to make the elections questionable and controversial and said the party’s top leaders were not able to contest the elections due to their convictions.

Hasina said, how will a party win the election? Where is his leadership? One man is accused of embezzling money for orphans, while the other is a fugitive and has been sentenced to life in the grenade attack case. Why would people vote for the party?

Hasina, the president of the ruling Awami League (AL), asked what people have got from the BNP, which had turned the country into a champion of corruption for five consecutive times and a safe haven for acts of extremism.

He said, who will vote for that party? The BNP knows very well that there is no chance of them winning the election. So they are trying to make the election controversial.

Stating that the BNP has lost faith in contesting elections, he said that its aim is to make elections suspicious or destroy the continuity of democracy.

“The voters cast their vote spontaneously but efforts have been made to make the election suspicious,” he said.

Noting that violent acts, including arson attacks, were carried out to sabotage the election, he said, but elections were held. You had experienced development, because the atmosphere remained calm after the elections.

Urging people to make a comparison between the tenure of BNP and AL, Sheikh Hasina said that the country got developing country status during her party’s government.

He assured that, it is my dream that no one will remain homeless. No one will live without food, electricity and education.

Responding to a question on the constitution of the next Election Commission, he said that the President will form a search committee for the purpose.

The term of the current Election Commission, which oversees the next general elections, will end in February 2022.

Commenting on the recent e-commerce scams, he warned those involved in making money through fraud.

A group of people are taking advantage of the tough times of the people to make money, he said. They should be brought under the ambit of law.

“We are not sitting idle as the culprits have already been arrested,” he said. We will find out where they deposited the money.

On a question about the vaccine for coronavirus, he said that Bangladesh has the capacity to make vaccines.

“We have received response from the world community and have made all preparations in this regard,” he said. Hopefully we will start the production process soon.

Previous articleMohamed bin Zayed receives from Nahyan bin Zayed the official shirt for the third edition of the “ADNOC Abu Dhabi Marathon”
Next articleBheemla Nayak: ‘Bheemla Nayak’ along with his wife .. used to be ‘so fond’ ..